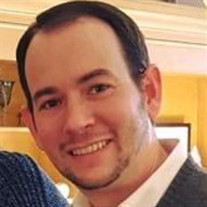 A graveside service for Alvin William Krech, III, 43, will be held at 11:00 a.m. on Thursday, May 6, 2021, at Laurel Hill Cemetery, Thomasville, Georgia with the Rev. Drs. Tim Filston and Jay Howell officiating. He died peacefully at his mother's home at Thomasville on May 4th. Will was born in Thomasville on January 19, 1978, the oldest son of Alvin William Krech, Jr. and Lavinia Lilly Krech. He graduated from Thomasville High School in 1996, then traveled and furthered his education in the culinary arts and cosmetology. He worked at The Gift Shop in Thomasville until a few months before his death. Will had a keen eye for aesthetics and design. He particularly enjoyed merchandising, so he often helped downtown Thomasville businesses spruce up their store and window displays His unassuming presence and ability to create beauty from the everyday lent themselves well to his working, most often behind the scenes, to help design and facilitate some of the best enjoyed parties and most memorable events his guests ever attended. Will was preceded in death by his grandparents, Alvin W. Krech, Sr. and Virginia Mardre Krech of Florida, and Roy M. Lilly and Mary Frances Lilly of Thomasville. He is survived by his parents, Alvin William Krech, Jr. and Lavinia Lilly Krech; his brothers, Hull S. Krech, Sr. (Rebecca), David H. Krech, Sr. (Amanda); his niece, Annaleah Krech and his nephews, Hull S. Krech, Jr., Noah T. Krech, Miller A. Krech,, David H. Krech, Jr., and Kaden Walker; his aunts and uncles, Roy M. Lilly, Jr. (Eleanor), and George R. Lilly, II (Nelray), all of Thomasville; Mary Anne Krech, Cassie K. Branske and Caroline K. Balesteri all of Live Oak, Florida; as well as his Lilly cousins who were raised in Thomasville almost as siblings with him, Mary Lawrence L. Lang (Ashley) of Thomasville, Roy M. Lilly, III (Nicole) of Savannah, Frances Lilly Howell (Jay) of Knoxville, Tennessee, Laura Lilly Cotten (Graham) of Birmingham, Alabama, and George R. Lilly, III (McClain) of Greenville, South Carolina; as well as by the next generation of cousins, A. Pierce Lang, Jr., of Thomasville; and John F. Howell, IV and Thomas H. Howell of Knoxville, Tennessee. Will was also very close to his Krech cousins: Jonathan Guthrie and Churchill Hudson (Jeff) of Ocala, Florida; Alexis Balesteri of Live Oak, Florida; and Cassie Anne McClure (Chuck) of Gilbert, Arizona. In lieu of flowers, memorials may be made to Big Bend Cares, 2201 S. Monroe St., Tallahassee, Florida 32301. Family and friends are invited to visit his online guest register at www.allenfh.com.

A graveside service for Alvin William Krech, III, 43, will be held at 11:00 a.m. on Thursday, May 6, 2021, at Laurel Hill Cemetery, Thomasville, Georgia with the Rev. Drs. Tim Filston and Jay Howell officiating. He died peacefully at his mother's... View Obituary & Service Information

The family of Alvin William Krech III created this Life Tributes page to make it easy to share your memories.

A graveside service for Alvin William Krech, III, 43, will be...