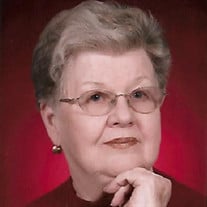 Bobbie Lafaye Millings Barrett passed away on August 19, 2021, just 12 days after her 86th birthday. Born in 1935 in Colquitt County, GA, she was the first child of Robert Lee (Rob) Millings and Jewell Esther (Lester) Marshall Millings. As a young child Bobbie loved living on the family farm, and being the only child for many years had run of the farm. As a young teen, much to her initial chagrin, but later to her subsequent joy, she was joined by twin brothers Clem Mack and Cecil Jack Millings, AKA Mack and Jack. Bobbie married Lesley Clyde Barrett of Grady County in 1956, and the young couple made Cairo their permanent home. As a mother of three, Bobbie was a master homemaker. She was known as an adventurous and talented cook, having introduced her family to tacos and taco salads long before Taco Bell even existed. Though she spent some time trying to hone her gardening and sewing skills with limited success, Bobbie’s housekeeping skills were top-notch -- she could make a house, no matter how large or small, spic and span within one hour, two hours tops. Bobbie was an inveterate shopper and perfected the art of the popular “hide the bags in the trunk and roll out one outfit at a time” technique. When her kids were young, Bobbie did hard-time as a Girl Scout and Cub Scout leader, and she was eternally grateful to the parents who stepped in to fill her shoes when her Scout gig was up. She was a failure at almost all vices, having been apprehended by her children smoking her first and only cigarette on the back porch of the family home and swearing to never smoke again. On another occasion, she once missed most of her surprise birthday party after indulging in exactly ¾’s of one adult beverage. That said, she did love a good Diet Coke and Hershey Bar combo. For many years, Bobbie played in a weekly game of bridge with her good friends. No one knows what was discussed at these card games, but let’s just say that the clocks all ran on time and the roads were in tip-top shape in Cairo, GA. during that era. Although born and raised in Hartsfield, Bobbie embraced Cairo as her home. She considered the citizens of Cairo her family, so much so that she received hundreds of graduations, birth, and wedding announcements over the years, occasionally even from folks she wasn’t acquainted with. She loved receiving every one of them. Bobbie was known for her fiery red hair, sweet demeanor, and amazing laugh, which often morphed into her signature laughing-so-hard-she-cried laugh. And as the song goes, “What a friend she had in Jesus.” Bobbie loved the Lord and he loved her right back. She spent many hours at First Baptist Church, both as a member and a volunteer, and counted the members of her Sunday School class as some of her very favorite people. Preceded in death by her parents, her beloved brother Jack, and her former husband Lesley, Bobbie is survived by, loved by, and will be missed by her son Martin Glenn (Buck) Barrett of Cairo, and daughters Kathy Ann Barrett Myers (Chico, CA.) and Wendy Tia Barrett, (Fort Lauderdale, FL.), son-in-law Jim Myers, grandson Calloway Myers (Boston, MA.), brother Mack Millings and sisters-in-law Katherine Millings and Peggy Maxwell, nieces and nephews Michelle Croft, Michael Millings, Lori Folsom, Leah Newsom, and Rob Millings, and their spouses and children. A private graveside service will be held at 11am on Thursday, August 29th at Rose Hill Cemetery of Colquitt County. A public Celebration of Bobbie’s Life will be held at a later date. In Bobbie’s memory, donations may be made to the Alzheimer’s Association or any charity that seeks to spread the word of Bobbie’s good friend, Jesus.

Bobbie Lafaye Millings Barrett passed away on August 19, 2021, just 12 days after her 86th birthday. Born in 1935 in Colquitt County, GA, she was the first child of Robert Lee (Rob) Millings and Jewell Esther (Lester) Marshall Millings. As a... View Obituary & Service Information

The family of Bobbie Lafaye Millings Barrett created this Life Tributes page to make it easy to share your memories.

Send flowers to the Barrett family.