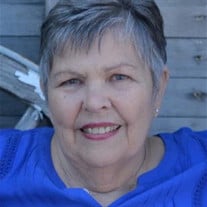 Brenda Blow Meacham, 73, of Thomasville, Georgia, passed away peacefully on January 23, 2022. She spent her last days at Southern Pines Senior Living with her children, grandchildren, and great grandchildren. Brenda was born on August 19th, 1948, in Thomasville, GA to the late Charles LaVern Blow, Sr. and the late Thelma Lenora Dekle Blow. Brenda has been known as Brenda Gail, Honey Gail, Georgia Grandma, and Gma. Brenda is survived by her husband John Meacham Jr., her brother Charles L. Blow Jr. (Judy), her son Ranes Carter (Heather), and her daughter Blace Clark (Stephen). Brenda's grandchildren in order of age are the late Solom Castillio, Sky Rutland (Gage), Lacey O'Neal, Braydon Carter, Tyson Carter, Kayleigh Carter, and Carter Paris. Brenda's Great Grandchildren are Ivey Rutland, Summer Rutland, and Charlie Rutland. Brenda loved all of her children, grandchildren, and great grandchildren, but she had a special place in her heart for her dogs Gromit, Gabby, Cissy, Bonnie, and Jake. She enjoyed sharing stories about her human and canine family. Reading responses on Facebook, and hearing stories from locals, she enjoyed talking about all of us. A few have stated that it feels like they already know us from her conversations. Brenda was known as a loving, caring, and giving person. She started college as an Art Major, and has always enjoyed painting, but most of her professional career was spent in the medical field helping other people. Brenda graduated from Thomasville High School in 1966. She earned a diploma of general education from Birdwood Junior College in 1968. She was a teacher at Rose City Christian School around 1970. Her medical career started in 1977 with a diploma from Thomas Area Technical School as a Respiratory Therapist. She became a Certified Respiratory Therapist Technician in 1978. She earned an Associates in Arts Degree from Thomas County Community College in 1979. If that weren't enough, she became a First Responder in 1980. She became a Registered Respiratory Therapist in 1983. Helping people breathe wasn't enough for Brenda. She must have wanted to do more. She became certified as an Emergency Medical Technician in 1987, a registered EMT in 1991, and a Basic EMT Instructor in 1991. She completed a course in Clinical Polysomnography (sleep studies) in 2002. Her final career was in Hyperbaric Wound Care Medicine where she retired. When Brenda wasn’t working hard to help others, she volunteered her time to help others. She was a member of the Red Hat Society with her mother, Thelma. She worked with the Hands On Thomas County, a volunteer community organization. She was a faithful member of The Church Of Jesus Christ of Latter Day Saints where she enjoyed time as a Primary Teacher. She enjoyed genealogy and family history. She and her husband, John, were part of civil war reenactments. She enjoyed painting and has many paintings of her furry family in her home. Brenda and her mother spent the last years of their lives at Southern Pines Senior Living where Brenda enriched the lives of staff members and residents. We are so thankful for the care and support they both received during those years. Our family is honored with the love and support we have received during this time. We have enjoyed hearing and reading so many positive memories about Brenda, her humor, her positive attitude, her generosity, and her love of others. She has made a big influence on so many throughout her life.

The family of Brenda Blow Meacham created this Life Tributes page to make it easy to share your memories.

Send flowers to the Meacham family.