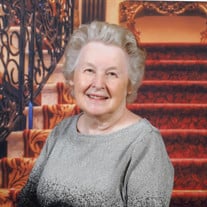 Carol Jeanne Harty, 75, passed away on May 30 at her home in Stockbridge, GA. She was a beloved wife, mother, grandmother, sister, and friend. She is survived by her husband Donald L Harty, her daughter Elizabeth Anne Craft (Jud), her brothers Phillip Bailey (Sue) and Tim Bailey (Dee), four stepsons, nine grandchildren, and two great grand-children. She is preceded in death by her parents, Charles Phillip Bailey and Edna Hampton Bailey, and her husband, Jay D. Reynolds. Born in Chickasaw, Alabama in 1946, Jeanne was the eldest child of Charles and Edna, followed by her brothers Phil and Tim. Jeanne attended Livingston College (now the University of West Alabama) where she earned her teaching degree. Jeanne was quick to smile and laugh, and she shared her joyful nature with her students as an elementary school teacher for over 30 years. Her classroom was always filled with colorful decorations, and she wrote songs (and occasionally rap verses) to accompany her lessons. She met Jay Reynolds, a fellow teacher, at a dance. They married and later had a daughter, Elizabeth. They shared eighteen happy years before Jay passed away from pancreatic cancer in 1994. Jeanne had always been a devoted and loving mother and that was just as true in the following years when she raised Elizabeth on her own. A friend introduced her to Don Harty, and when they married in 1998, Jeanne’s family grew to include four sons; Don, Jr., Chris, Robert, and Tim; and eventually grandchildren and great-grandchildren. Their home was filled with love over the next twenty-three years. Jeanne’s Christian faith was a central pillar of her life, a source of joy and strength, and she was known as a “prayer warrior”. If you shared your worries with her, she was always willing to listen and pray with you. She attended Griffin First Assembly, where she was a member of the intercessory prayer team, and she had been active in Aglow Ministries. Jeanne’s joyful spirit never faltered, even over the last five years as she dealt with the effects of hydrocephalus and Alzheimer’s. She earned the nickname “Smiley”. In her final months, she still smiled as Don, her tireless caretaker, teased or sang to her. She will be greatly missed. A graveside funeral service will be held on Friday, June 4 at 10 A.M. at Laurel Hill Cemetery in Thomasville, GA. Pastor Greg Marsh will officiate. In lieu of flowers, the family requests that donations be made in Jeanne’s honor to Gideon’s International.

Carol Jeanne Harty, 75, passed away on May 30 at her home in Stockbridge, GA. She was a beloved wife, mother, grandmother, sister, and friend. She is survived by her husband Donald L Harty, her daughter Elizabeth Anne Craft (Jud), her brothers... View Obituary & Service Information

The family of Carol Jeanne Harty created this Life Tributes page to make it easy to share your memories.

Send flowers to the Harty family.