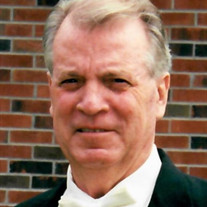 Memorial service for Charles Haire, 81, of Thomasville will be held at 2:00 pm, Thursday, February 25, 2021 at Dawson Street Baptist Church. The family will receive friends from 1-2pm, before the service. Interment will follow the service at Laurel Hill Cemetery. Charles Haire died Monday, February 22, 2021, after a sudden illness. He was born November 2, 1939. He was the son of Johnny and Mary Frances Haire. Charles moved to Thomasville from Cordele, Georgia as the result of a transfer as an employee of the Goodyear Company. He became a member of the Sheriff’s Posse of Thomas County Sheriff’s Department and later became a full time Deputy Sheriff and retired from that position in 2004. He attended Dawson Street Baptist Church where he met “that girl that played the piano”, June Keadle. They married on March 31, 2001. Charles had a great sense of humor which he liked to share with his many friends and family. He enjoyed calling his friends by phone and checking on them or just to talk and would often begin the conversation with “Is this the party to whom I am speaking?” He was a bit of a jokester but it was all in fun just to make someone laugh and give himself a good laugh. He would often tease a waitress when she brought his ticket that “I left my billfold at home. Can my wife come back tomorrow and wash the windows?” He had a “shop” in his backyard where he enjoyed woodworking, repairing broken items for June and his friends and sometimes trying to “invent” something just to see if it would work and also just tinkering around. He was a faithful member of Dawson Street Baptist Church where he served on the Ministry Team as an usher and greeter. He is survived by his wife, June; two sons, Michael Haire and Edward Haire (Jeanette); one brother, Douglas Haire (Trish) of Ocala, Florida; three grandchildren, Brittney White, Adam Haire (Damaris) and Bryce Haire; three great grandchildren, Bentley White, Abigail Haire, and Charlie Haire. He was preceded in death by two brothers, Robert and Joe, and two sisters, Janice and Frances. He is also survived by several nephews. Family and friends are invited to visit his online tribute page at www.allenfh.com

Memorial service for Charles Haire, 81, of Thomasville will be held at 2:00 pm, Thursday, February 25, 2021 at Dawson Street Baptist Church. The family will receive friends from 1-2pm, before the service. Interment will follow the service at... View Obituary & Service Information

The family of Charles Haire created this Life Tributes page to make it easy to share your memories.

Memorial service for Charles Haire, 81, of Thomasville will be...

Send flowers to the Haire family.