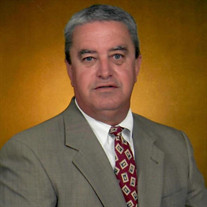 Charles Thomas (Tommy) Martin of Barwick, Georgia, went to be with his Saviour on Friday, January 14, 2022. He was born on August 30, 1949, in Brooks County and was the son of the late David Chapman Martin and Marjorie Ann McCann Martin. Upon graduating from Brooks County High School, Tommy began his career with AT&T in Macon, Georgia, but returned once a month to participate in the Army National Guard in Quitman, Georgia. He also pursued his Associate's Degree in Business Management from Macon College. In 1970, he married Carole Elaine Edge Martin who was living in Warner Robins, Georgia at that time. The couple were blessed with a daughter, Amy Marlyn Martin House (Eric), who had the reputa­ tion of being a Daddy's girl. They could be found on a ball field, fishing, hunting or lounging on the beach. Their special bond continued until his passing. She and Eric gave him his most precious treasure, one granddaughter, Grayson Caroline House, and one grandson, Chapman Thomas House and again, you could find them on a ball field, fishing, hunting or lounging on the beach. In addition to his deep love for his family, he was a dedicated member of Barwick Baptist Church, where he served as an ordained deacon. It was a rare occasion for him to miss church or attendance in Wendell Quick's Sunday School Class and eventually the class of Hank Glover. He also was a member of the Barwick Chamber of Commerce where he held the position of Vice President. He was a strong believer of the Golden Rule and putting others ahead of himself. He was generous with his love, his time and his finances. He enjoyed his "retirement weekends" - breakfast with his wife on Friday, breakfast with his friend and neighbor, Benny Nichols on Saturday, then, Sunday School and church on Sunday. In addition to his wife, his daughter and her family, he is survived by his sister, Pat Martin Nichols (Lamar) of Pavo, Georgia. He was preceded in death by his sister, Martitia (Marty) Martin Jones. Also remaining are sisters-in-law, Mildred Calhoun of Orlando, FL; Beatrice Edge and Janice Driggers (Eddie) of Eastman, GA; and Lynn Reagan (Walter) of Warner Robins GA, as well as numerous nieces, nephews, great nieces, great nephews, and cousins. Funeral services will be at Barwick Baptist Church on Tuesday, January 18, 2022 at 11:00 with burial in Rosewood Cemetery. Visitation will be from 11:45 to 12:30. Donations may be made to Barwick Baptist Church. Covid protocol will be followed with masks requested. Allen & Allen Funeral Home in Thomasville is in charge of arrangements.

Charles Thomas (Tommy) Martin of Barwick, Georgia, went to be with his Saviour on Friday, January 14, 2022. He was born on August 30, 1949, in Brooks County and was the son of the late David Chapman Martin and Marjorie Ann McCann Martin. Upon... View Obituary & Service Information

The family of Charles Thomas Martin created this Life Tributes page to make it easy to share your memories.

Charles Thomas (Tommy) Martin of Barwick, Georgia, went to be...

Send flowers to the Martin family.