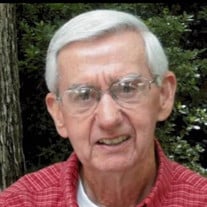 A good name is to be chosen rather than great riches, loving favor rather than silver and gold. Proverbs 22:1 The life of Charles Allen Thornhill Sr. will be celebrated at Dawson Street Baptist Church on Wednesday, April 21st with visitation at 12:30 to 2:00 in the fellowship hall followed by a service at 2:00 in the sanctuary. A private, graveside burial will be held after the service at Barwick Baptist Church cemetery. He passed away peacefully at his home surrounded by his family on Sunday, April 18, 2021 after a lengthy battle with Parkinson’s Disease. Born September 29, 1938, in Barwick, Georgia, to Leonard and Elsie Thornhill, Charles graduated from Barwick High School in 1956. He was employed by Brooks County Packing company and then served his country in both the Georgia and Florida National Guard. After his service, he began a 41-year career with Davis Water & Waste Industries, Inc. where he advanced from a warehouse worker and office clerk to director of purchasing and vendor relations when he retired in 2002. Though he was devoted to his career, his love and devotion for his sweetheart, Jane Long, was legendary. They married on May 11, 1961 and were blessed with three children, Charla, Carla and Allen, and seven grandchildren. Charles was a faithful member of Dawson Street Baptist Church in Thomasville and an ardent supporter of his church, mission work, and many other charitable causes. He enjoyed spending time with friends at the golf course, but his true passion was visiting the sick and shut-in. He appreciated all of the visits, concern, and prayers from friends and family and the excellent attention he received from his caregivers. The family greatly rejoices that Charles is no longer suffering and has been restored fully in heaven. Charles is survived by his cherished wife, Jane; their three children: Charla Floyd (Scott), Carla Barnes, and Charles Allen Thornhill, Jr. (Jennifer); seven grandchildren: Lauren Mott (Dillon), Paul Barnes, Kate Barnes, Ross Barnes, Emory Dean, Charles Allen Thornhill III, and Elizabeth Thornhill; sister, Sue Owens (Wilburn); sister-in-law Marilyn Thornhill; and numerous nieces, nephews and extended family. He was preceded in death by his parents, Leonard Dorough and Elsie Chandler Thornhill of Barwick, GA; his brother Grady Claude Thornhill of Waycross, Ga; and son-in-law Paul Lamar Barnes, Jr. of Euharlee, GA. The family wishes to express special gratitude to the caregivers from Home Instead and Hospice of SW Georgia with whom they formed a special bond. In lieu of flowers, Charles would encourage you to donate to your local church or to your favorite children’s charity. Family and friends are invited to view his online tribute page at www.allenfh.com.

A good name is to be chosen rather than great riches, loving favor rather than silver and gold. Proverbs 22:1 The life of Charles Allen Thornhill Sr. will be celebrated at Dawson Street Baptist Church on Wednesday, April 21st with visitation... View Obituary & Service Information

The family of Charles Allen Thornhill Sr. created this Life Tributes page to make it easy to share your memories.

A good name is to be chosen rather than great riches, loving...

Send flowers to the Thornhill family.