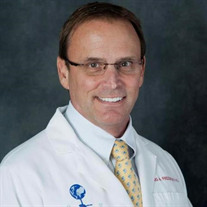 Dr. Craig Allen Fredericks, MD, MBA, died peacefully at Archbold Memorial Hospital on June 19, 2022. Craig was born in Britt, Iowa on September 22nd, 1955, to the late Dr. Teddy R. Fredericks and Mrs. Dolores Fredericks. He was raised in Barstow, California and graduated valedictorian of Barstow High School in 1973. He attended Stanford University where he earned a degree in philosophy and graduated with honors in 1977. He was also a member of the Stanford Golf Team and named captain his senior year. In 1981, Craig earned his medical degree from George Washington School of Medicine where he was ranked first in his class. He trained as a Neurosurgery resident at the University of Southern California Medical Center for 7 years and was appointed Chief Resident his final year. He later went on to complete a fellowship in Pediatric Neurosurgery at Children's Hospital of Los Angeles. In 1990, he moved to Thomasville, Georgia to join the South Georgia Neurological Institute where he practiced alongside his partner, Dr. Gerald Kadis, for 32 years. Outside of medicine, Craig enjoyed playing polo, water-skiing, snow-skiing, and golfing. Upon moving to Thomasville, he and his ex-wife bought 250 acres which they developed into a horse farm that came to be known as Palo Alto Farm. Craig was an avid polo player and foxhunter. He competed in polo tournaments in Ocala, Florida and fox-hunted with Live Oak Hounds in Monticello, Florida. In 1995, Craig's daughter Haleigh was born, and he adored her with all his heart. Following closely in his footsteps, she recently earned her medical degree from Medical College of Georgia and is currently a first year Obstetrics and Gynecology resident at the University of Florida. As someone who's always been committed to lifelong learning, Dr. Fredericks earned his Master of Business Administration degree from George Washington University in 2012. In 2014, he married the love of his life, Jessica Fredericks. Along with their two cockapoos Mason and Lucy, they shared many happy years together. Dr. Fredericks was well-respected and loved by the Thomasville and South Georgia community. His influence and friends stretch from coast-to-coast. While his brilliant surgical skills and charming bedside manner will be missed by his patients, his witty sense of humor and captivating personality will surely be missed by all. Dr. Craig Fredericks is survived by his daughter, Haleigh; his devoted wife, Jessica along with their two precious dogs, Mason and Lucy; and his sister Deborah Hazelton who resides in Indian Wells, California. Funeral service will be held at Allen and Allen Funeral Home on Saturday, June 25, 2022, at 11:00 a.m. In lieu of flowers the family asks that you make a donation to the Thomasville-Thomas County Humane Society.

The family of Dr. Craig Allen Fredericks created this Life Tributes page to make it easy to share your memories.

Send flowers to the Fredericks family.