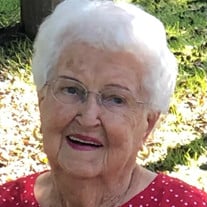 Graveside services for Doris Miriam Griffin, 94, of Ochlocknee, will be held at Big Ochlocknee Baptist Church on Friday, April 22nd at 4:00 p.m. with Reverend Dennis Norman officiating. Mrs. Griffin passed away Wednesday, April 20, at her home. Born September 28, 1927, she was the daughter of the late Almond and Bell Griffin. She was married to Thurston Lee Griffin, who preceded her in death. For more than 23 years, Mrs. Griffin and her husband owned and operated a grocery and hardware store in downtown Ochlocknee where she also served as Mayor for six years. During her life she was known in the community by many names, "Mrs. Griffin," "Miss Doris," and "Miss Dorothy." However, after the arrival of the first grandchild, she became affectionately known simply as "MiMi." After retiring from the grocery and hardware store, she and her husband moved to the country just outside Ochlocknee. Mrs. Griffin then decided that she had too much free time on her hands, so she worked as a paraprofessional at Magnolia-Chappelle and Cross Creek Elementary Schools. At age 66, after the sudden loss of her husband, Mrs. Griffin also found the time to complete a Certified Nursing Assistant Degree at Thomas Technical Institute. Later in her life she worked until the young age of 84 as a clerk at Ochlocknee City Hall before she decided to stay at home to enjoy life. Mrs. Griffin was a devoted churchgoer until her health began to decline late in life. She then enjoyed church on television and read her Bible daily. She loved family gatherings, and new babies would always make her eyes twinkle. Her last pet, a small dog named Tolly, gave her faithful companionship and pleasure during her last years. Mrs. Griffin is survived by three daughters, Mary Ann (John) Davis; Rita Griffin; Karen (Bobby) Smith; son, John (Debbie) Griffin. Her son Robert and daughter-in-law Patricia Griffin preceded her in death. She had seven grandchildren, Kay (Jeff) Cobb; Jason (Rachel) Griffin; Jud Davis; Jill (Ben) Hedges; Matt (Lindsay) Marchant; and Marc (Amity) Marchant. Granddaughter Meagan Stommes preceded her in death. Mrs. Griffin also had 17 great-grandchildren and eight great-great grandchildren, along with sisters Elizabeth Collins and Martha Branch and a host of nieces and nephews. In addition to her husband, a son, and a granddaughter, Mrs. Griffin also was preceded in death by a great grandson Jared Lester and brothers Roy Griffin, J.R. Griffin, and Hilton Griffin. The family will be gathering at the home of Mary Ann and John Davis, 911 Hwy 188, Ochlocknee, Georgia.

The family of Doris Miriam Griffin created this Life Tributes page to make it easy to share your memories.

Send flowers to the Griffin family.