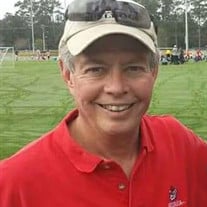 As a warm summer breeze blew among a beautiful southern morning, the love of our lives slipped from this earthly realm into the loving arms of Jesus. Surrounded by his family, James Timothy Willis, D.C. walked through the Pearly Gates on July 27, 2021. Born on February 20th, 1956 to the late James Mackey Willis and Maxine Spence Willis. He met the love of his life, Marge Sons Willis, in the Sunday School Class of Wiley Grady. They married in February 1, 1986 and enjoyed life and making wonderful memories with their sons, Jason (Hisa) and Tyler (Kylie). Nothing made him happier than to spend special moments with his grandchildren, Austin, Bre, and Adyson. Graduating from Ravenwood Academy in 1974, he attended the University of Georgia, where he was a member of the Tau Kappa Epsilon Fraternity Chapter, and pursued a career in the chiropractic field. After graduating in 1979 from UGA, he attended the Texas Chiropractic College where he graduated with his Doctorate of Chiropractic in 1984. Moving back to South Georgia, he began his chiropractic career. He never turned away a patient that was in pain and would give healing care to those in need. He was an active member of the Georgia Chiropractic Association and served for over 30 years on the GCA Peer Review Committee serving as chairman for the past 20 years. He was active in the Jaycees as Treasurer of the organization. He enjoyed standing around the bonfire selling Christmas trees, setting up for Miss Thomasville pageant, and the Arts and Crafts festival in Paradise Park during the Rose Show Festival. Labor Day weekend would find him at the Plaza Restaurant working with the Jerry Lewis MDA Labor Day Telethon. He became active in the Kiwanis Club, flipping pancakes and barbecuing chicken. Saturday's in the Fall saw him watching the Dawgs battling on the field. He enjoyed watching the classic games throughout the off-season. We always laughed at him because he would yell at it like it was the first time watching. Especially those games with Herschel Walker plowing towards the end zone. He will be mostly remembered as Marge's "Do-Boy", fulfilling her "Honey Do" list, helping her with her God-given talent of creating beautiful floral arrangements. Tim was a member of First Baptist Church of Thomasville where he served 15 years as the five-year-old Sunday School Leader. Sunday morning church service would find him upstairs in the balcony, asking for volunteers to be ushers, and counting the attending faithful. He was a member of the Gary Milton Life Group where he found other "Fishermen for Jesus" and growing his faith. He is survived by his wife, Marge Sons Willis of Thomasville; sons Jason (Hisa), Tyler (Kylie); grandchildren Austin, Bre, and Adyson; siblings Carl Willis (Christine), Cheryl Katz, Brenda Ferros (Mike). He is also survived by several nieces and nephews. Pallbearers: Christopher Willis, Ryan Ferros, Kevin Harley, Dana Harley, Stuart Sons, and John Sons. Honorary pallbearers: Gerald Driggers, Vandy Davis, Stanley Fiveash , Kurby Dawson , Michael Quigley, Scooter Walker, Slade Bacon and Tracy Warmack. Services for James Timothy Willis will be held Friday, July 30, 2021 at 11 AM at First Baptist Church with Rev. Gary Milton, Rev. Andy Daughtry, Wiley Grady, and Rev. John Carr officiating. Visitation will be held Thursday, July 29, 2021 from 5-7 PM at the Allen & Allen Celebration of Life Center.

As a warm summer breeze blew among a beautiful southern morning, the love of our lives slipped from this earthly realm into the loving arms of Jesus. Surrounded by his family, James Timothy Willis, D.C. walked through the Pearly Gates on July... View Obituary & Service Information

The family of Dr. James Timothy Willis created this Life Tributes page to make it easy to share your memories.

As a warm summer breeze blew among a beautiful southern morning,...

Send flowers to the Willis family.