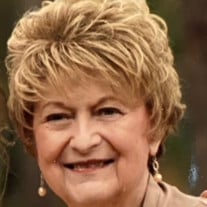 Services for Emily Smith will be held Saturday, December 12, 2020, at 2:00 PM at Sunset Memorial Gardens Fountain with Pastor Jeff James officiating. The burial will be private at Sunset Memorial Gardens. Emily passed away on December 9, 2020. She was born on July 13, 1941, in Asheville to the late Robert Burgess and to the late Mae Burgess. She was married to Ray Smith. Emily was a clerk at Cocroft Music Company. She was a member of Dawson St. United Methodist Church and Calvary Chapel Church. She was also a member of the Daughters of the American Revolution and the United Daughters of the Confederacy. Survivors include her children, Paul Robert Smith and Catherine of Thomasville, GA, Vicki Smith Farley and Steve of Eufaula, AL; grandchildren, Stephanie Nicole Giglio (Chris), Brian Farley (Callie), Kristyn Pittman (Scott), Paul Robert Smith, Jr., Carolyn Byrd (Keith), Maggie Schmittou (Sam); brother, Alfred Burgess (Mary Jane Slappey) of Thomasville, GA. She was preceded in death by her brother, Robert Burgess (Glenda.) Memorials may be made to Calvary Chapel Mission Project, 100 Commerce Park Drive, Thomasville, Ga 31757. Friends and family are invited to visit her online memorial tribute page at www.allenfh.com.

The family of Emily Smith created this Life Tributes page to make it easy to share your memories.

Services for Emily Smith will be held Saturday, December 12,...

Send flowers to the Smith family.