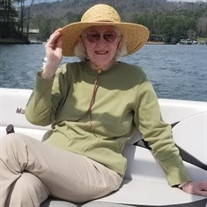 Ethel Ogburn Scott Mitchell, 87, passed away peacefully on April 15, 2022 at her home in Lakemont, Georgia. She was the the loving wife of the late Samuel Jones Mitchell, Jr. and the proud mother of Ethel Scott “Scotty” Mitchell and Mary Mallette Mitchell Faherty. The youngest child of Mary Edda Ogburn Scott and James Carey Scott, Sr., Ethel was born on June 9, 1934 in Thomasville, Georgia to the delight of her sister, Mary Edna Scott Courson, and her brother, James Carey Scott, Jr., both of whom predeceased her. Ethel attended Thomasville High School and graduated summa cum laude from Brenau College in Gainesville, Georgia in 1956. Upon graduation she attended FSU for further courses and then began a fellowship at Emory University. She lived the majority of her married life in Valdosta, Georgia with her husband Sam, to whom she was married for 46 happy years until his passing in 2006. A lifelong follower of Christ, Ethel attended First Baptist of Thomasville during her formative years and Park Avenue Methodist Church of Valdosta as an adult. Ethel was a renaissance woman yet Southern to the core. First and foremost, she was a wife and mother. Prior to marriage and children, Ethel had a burgeoning career that included working for the National Research and Development Company under director Dr Wernher von Braun. She was ahead of her time in that she understood computers and even “coded” in the early days using punch cards! An avid horticulturist, Ethel could name the vast majority of plants and trees indigenous to the South. She spent countless hours walking in the woods with friends and family educating all with her talents and knowledge. Photography was another favorite pastime, especially capturing images of flowers on the side of the road. A short trip could take hours in the spring and summer! Ethel’s love of learning was voracious; she read and absorbed the Bible, volumes on Einstein’s theories, chemistry, geology, astronomy and world history, just to name a few. Her interest never waned and she read books and articles on these subjects up to the final days of her life. Genealogy was another fascination and Ethel devoted over thirty years researching and tracing the family lineage back to Charlemagne in the ‘700s. She even became a member of The Order of the Crown of Charlemagne in the United States of America. Ethel was a Daughter of the American Revolution (DAR), a member of Colonial Dames, First Families of Georgia and in many other important local, regional and national organizations. Ethel and Sam possessed a love for classical music and especially enjoyed “The Three Tenors.” She was a classical pianist, artist and quilter and additionally earned the accreditation of Master Flower Show Judge in the Valdosta Garden Club. An active Girl Scout leader, she supported her daughters in all of their activities and enjoyed playing tennis, golf and riding horses. Following in the footsteps of her father, Ethel earned her private pilot’s license. Sam and she spent many hours flying to and from their Lake Rabun property in North Georgia as well as trips to Florida and around the Southeast. Above all else, Ethel ensured her friends and family knew that the driving force in her very full life was her relationship with Christ. To that end, she loved reading, recording and sharing scripture with her children and grandchildren and her prayer was that everyone would know Christ the way she did throughout her lifetime. Ethel is survived by her daughters Ethel Scott “Scotty” Mitchell (Jason Gilbert) of Lakemont, GA and Mary Mallette Mitchell Faherty (Tim) of Portland, OR and her grandchildren, Mitchell Carl Hebner of Atlanta, GA, and Samuel Joseph Faherty, James Thomas Faherty and Hayes Katherine Faherty all of Portland, OR. Her nieces and nephews and their children include James Carey Scott III (Nancy); Elizabeth and Nelson Scott; Marion Nelson Scott, Sr. (Kristy); Nelson Jr.; Maggie, Julian, and Duncan; Laura Courson Karas (Jim); Matthew David Scanlan (Sarah); Lindsay Scanlan Sliger (Chris); George Scott Courson (Barbara); Gregory Scott Courson; Mary Ethel Courson Waters (Dale); Katelyn Michelle Waters; and Ethan Dewayne Waters. A graveside service will be held on Sunday, April 24, 2022 at 1 pm on Main Street (Old Section) in Laurel Hill Cemetery, 600-700 East Jackson street (Hwy 319) Thomasville, Georgia. A memorial service will follow at 2 pm at First Baptist Church, 210 N. Broad Street, Thomasville, Georgia.

Ethel Ogburn Scott Mitchell, 87, passed away peacefully on April 15, 2022 at her home in Lakemont, Georgia. She was the the loving wife of the late Samuel Jones Mitchell, Jr. and the proud mother of Ethel Scott &#8220;Scotty&#8221; Mitchell... View Obituary & Service Information

The family of Ethel Ogburn Scott Mitchell created this Life Tributes page to make it easy to share your memories.