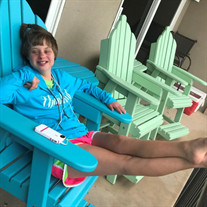 Funeral service for Georgianna Sumner French will be 10 am on Saturday, August 28, 2021, at Sunset Memorial Gardens, graveside. Rev. Terry Hurst will officiate. "Georgi", age 25, daughter of Jeffrey and Denise Halstead French, of Tyrone, GA, passed away Saturday, August 21, 2021 at Piedmont Fayette Hospital. Born in Albany, GA and weighing only 1 pound 4 ounces, Georgi has been a fighter since birth. She may have been tiny, but she overcame numerous hurdles throughout her lifetime, even though the odds were rarely in her favor. She was truly a miracle. Georgi was constantly sharing her love with others, especially with her puppy, Maggie, and favorite toy, Buzz Lightyear. She was also funny and stubborn, which fit perfectly with our family and friends. Georgi was a collector, gathering the hearts of people in her circle as easily as she gathered seashells, pictures, "egg balls", and balloons. She truly made an impact on every life she touched. Many teachers and staff positively influenced Georgi throughout her school career. She first attended Hand-in-Hand Primary School in their very first fully inclusive 4-year-old program. She eventually graduated from Northgate High School in Newnan, GA in 2018. Whether it be dancing to music (anywhere or anytime) or playing at the beach, Georgi brought joy to all. Georgi is survived by her parents, Jeffrey and Denise Halstead French, her little brother, Jonah Adam French, and her very special big sister/cousin, Jennifer Erin Hay. She is also survived by aunts Karyl Halstead Lauder (Jack), Cheryl Halstead Hay (James), Laura French Shores (Joel), Melanie French Redmond (Shawn), Dedra Sumner Fredrick (Jeffrey). Uncles Roy French, and James Sumner (Cheryl), and cousins, Bryce Lauder (Tara) Beau Hay, Jennifer Hay, Lindsey Stallings, Trey Elder, Julie Schmit, Kinley Shores Stanfield, Jessica Shores, Cory Bryant, Sydney Born, Rebecca Sumner, and Will Sumner. Georgi is preceded in death by maternal grandparents, Mack and LaVerne Halstead and paternal grandparents J. R. French and William and Patty Sumner. In lieu of flowers, Memorial contributions may be made to Hands and Hearts for Horses, 3824 Lower Cairo Road, Thomasville, GA 31792 or to Make a Wish of Georgia.

The family of Georgianna Sumner French created this Life Tributes page to make it easy to share your memories.

Funeral service for Georgianna Sumner French will be 10 am on...

Send flowers to the French family.