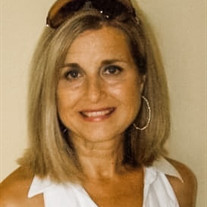 Gloria Danette Davidson Fielding, aged 68, passed into eternal life at noon on Good Friday, April 15, 2022 in Thomasville, GA. She was surrounded by family and the amazing prayers and love of her friends. Gloria is survived by her husband Milton,... View Obituary & Service Information

The family of Gloria Danette Fielding created this Life Tributes page to make it easy to share your memories.

Send flowers to the Fielding family.