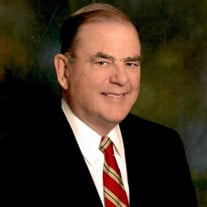 Great souls touch our lives in transformative ways. Heeth Varnedoe III, 84, of Thomasville, Georgia, was one such soul. He passed away peacefully on Passover at his home on March 27, 2021. A celebration of life will be held Friday, April 9, 2021 at 11:00 a.m. at The Biscuit Company in Thomasville, Georgia, following a private service at Laurel Hill Cemetery. Born February 10, 1937, in Thomasville, Georgia, to Heeth Varnedoe Jr. and Claire Flowers Varnedoe, Heeth graduated from Thomasville High School and the University of Georgia. He married his high school sweetheart, Jacqueline Ponder, on March 19, 1960. During their marriage of 61 years, they had four children, Jacqueline, Elizabeth, Heeth and Howard, ten grandchildren, and two great-grandchildren. Heeth began his journey in business by working summers at Flowers Foods during high school and college, first sweeping floors and changing oil in delivery trucks and then running bread routes. After graduation from college, he began full time as a route salesman. During Heeth’s 40-year tenure, the company grew from a small-town family business with two bakeries to over 30 bakeries and annual sales of 1.5 billion. He served the food industry nationally in multiple ways, including as Chairman of the American Bakers Association and as a board member of the American Institute of Baking. At his retirement, he was President and Chief Operating Officer of Flowers, by then a Fortune 500 company. Though his trajectory took him out of bread trucks and into board rooms, Heeth believed that he was a servant to the employees, no matter where they appeared on an organizational chart. So when one spoke to the Flowers people in plants all over the country, the stories they told were not of his accomplishments. They would tell of Heeth’s visiting their bakery and remembering their names, asking specific questions about the welfare of their families. Many would say Heeth had an uncanny way of pulling them aside and speaking an encouraging word that would change the course of their lives. And they revered him for it. Heeth retired from Flowers in 1997 to focus on sharing the unmerited love of God with his wife, Jacqueline. They traveled into such far-flung corners as Europe, Southeastern Asia, Africa, and Japan. He would write a book about redefining success in the marketplace entitled Called to Excellence. In his later years, Heeth and Jacqueline focused on sharing their journeys of faith with those close to home, frequently hosting House of Zion on Friday nights in their den. Lives were changed, encouraged and strengthened, with Heeth ministering up to the last week of his life. An avid outdoorsman, Heeth could be found on fall afternoons in a dove field surrounded by family, the truck doors flung wide open, radio blaring, listening to Larry Munson imploring the Dogs to “Hunker Down,” and waiting for the birds to start flitting in. Then they would make their way back to the farmhouse, build a fire, prepare supper, and talk about the ones that got away. But the lifelong memories will never go away. Heeth, better known as Giddy to his grandchildren, cherished his role as grandfather. Special memories include hours at the Waffle House, discussing their hopes and fears while also teaching them the ways of compassion and respect. Many a Saturday they would wet a hook at the family farm, sit on a deer stand, play a game of Gin Rummy, or just drive around “checking the birds” and enjoying the great outdoors. Known for his exceptional character, integrity, and countless gifts of anonymous generosity, Heeth believed that success was not measured in a moment but over a lifetime. He shared often that the most valued of all accolades was God’s saying at the end of our journey, “Well done, my good and faithful servant. Enter into the joy of your Lord.” The family greatly rejoices that Heeth has truly entered into the joy of his Lord. Heeth is survived by his cherished wife of 61 years, Jacqueline Ponder Varnedoe; their four children: Jacqueline Morgan (Robert), Elizabeth Malone (Randolph), Heeth Varnedoe IV (Susan), and Howard Varnedoe (Dawn); 10 grandchildren: Morgan Purvis (Krishan), David Malone (Gabrielle), Randolph Malone V, Ann Varnedoe, Heeth Varnedoe V, Joshua Varnedoe (Melanie), Andrew Varnedoe (Rebekah), Ashley Varnedoe, Phillip Varnedoe, and Katie Varnedoe; great grandchildren: Owen Malone and Raegan Purvis; sister, Claire Flowers Thomas; brother-in-law, Bill Ponder (Joann); two nieces: Claire Timm and Julie Carter; and two nephews: Kellett Thomas and Todd Ponder. He was preceded in death by his parents, Claire Flowers Varnedoe and Heeth Varnedoe, Jr. The family wishes to express special gratitude to Heeth’s caregivers over the past few years, particularly Leon Donald and Buster Carr. In lieu of flowers, donations may be made to: Fellowship of Christian Athletes, PO Box 466, Thomasville, Georgia 31799; University Fellows Experience, The University of Alabama, Box 870169, Tuscaloosa, Alabama 35487; Glory of Zion International Ministries, PO Box 1601, Denton, Texas 76202; or a charity of your choice.

Great souls touch our lives in transformative ways. Heeth Varnedoe III, 84, of Thomasville, Georgia, was one such soul. He passed away peacefully on Passover at his home on March 27, 2021. A celebration of life will be held Friday, April 9,... View Obituary & Service Information

The family of Heeth Varnedoe III created this Life Tributes page to make it easy to share your memories.