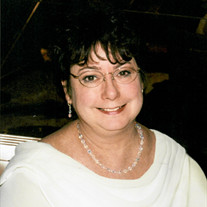 Holly Sullivan Foskey passed away on Friday, July 16, 2021 at her home in Thomasville, GA. A Celebration of Life service will be held Friday, July 23rd at 11:00am at the Thomasville First United Methodist Church. Graveside service will be held on Saturday, July 24th at 11:00am at the Wadley City Cemetery, Wadley, GA. Holly was born on December 25, 1950 in East Cleveland, Ohio to Bruce Cornelius Sullivan and Katharine Kelley Sullivan. After graduation from Lakewood High School in Cleveland, Ohio, she attended Kent State University seeking a major in art. She then changed her direction and sought out a business career. Being a product of the early 1970's, Holly was undeterred by the fact that most in the corporate world were male. She began her career as a secretary to the Cleveland office manager with the Insurance Company of North America. With her ambition and drive, she successfully moved up from clerical to professional positions in underwriting, then supervisory positions and training especially in the area of computer programs. She was named to a national training team within the company and traveled throughout the country training in various offices. From there, she moved on into regional management areas prior to retiring in 2005. She was proud of her successes in the workplace and that she was considered one of the early women trailblazers in the corporate world. Holly and her husband Brad were married on November 25, 1989 in the Chapel at Simpsonwood, Norcross, GA. Following their retirement, they moved to Thomasville in 2005 and were members of the First United Methodist Church and the Catherine Daughtery Sunday School Class. Holly served as a Stephen Minister while living in Charlotte, NC. She was instrumental in establishing Stephen Ministry at TFUMC. She served as a past president of the Archbold Auxiliary prior to joining the Archbold team working part time with the Infection Control Department for the past eleven years. She volunteered with the Thomas County Food Bank and served several years as the secretary of her HOA. She is survived by her husband Brad Foskey; son Gregory Foskey; daughter Sonya Bateman (Todd); granddaughters Erica Henderson (Patrick) and Ivy Singleton; great-grandchildren Wes and Aubrey Henderson; step-sister Patricia Chimo (Gary). The family will greet friends following the service. In lieu of flowers, donations may be sent to the Thomasville First United Methodist Church, P.O. Box 975, Thomasville, GA 31799 or the Thomas County Food Bank.

The family of Holly Sullivan Foskey created this Life Tributes page to make it easy to share your memories.

Send flowers to the Foskey family.