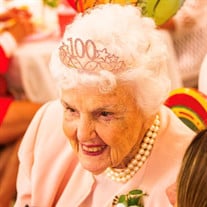 On January 31, 2021 Janet Horne Lanier McLendon died peacefully at 101 years old. She was preceded in death by her parents Olin Sugar Horne, Sr. and Irene Thomas Horne, sister Harriette Lois Horne Pearce, four brothers Olin Forrest, Thomas Sam, Julian F. and Olin S. Jr., and husband Sidney A. Lanier October 1979 and Claude E. McLendon February 2007. Janet known also as Net, was born on July 13, 1919 in Metcalfe, Georgia. She graduated from Thomasville High School in 1936 and was awarded her teaching certificate from Bessie Tift College which later became part of Mercer University. She taught in Coolidge where she met and married Sidney A. Lanier on June 2, 1939. She continued teaching in Metcalfe and Lake Park, Georgia until their two daughters were born. She helped her father at his general store, Horne Mercantile in Metcalfe, Georgia and also worked in Archbold Memorial Hospital's bookkeeping department for ten years. Widowed in 1979, she married Claude McLendon May 14, 1981. They enjoyed boating, fishing and camping with friends. Like her father she loved fishing, gardening, beach trips to the coast, and the Atlanta Braves. She was a devoted member of the Thomasville First Baptist Church, always bringing her beloved well worn hand notated Bible. Her humor and wit were only exceeded by her kindness to all who knew her. She was devoted to helping neighbors, friends, and families through good and bad times. Her beautiful smile was indicative of her love of life and faith. All of her life she shared her good nature and humor with all around her. Many thanks to those who cared for her so lovingly in her last few years. She is survived by her daughters Rebecca Irene Lanier Allen (Jack), Lois Elizabeth Lanier Mason (Roswell), grandchildren Rebecca Lanier Allen, Adrian Leigh Welch White, Irene Hamilton Allen Gleason (John), Rebecca Lynn Welch Vendryes (Michael), Richard Cooper Welch (Amanda), Sidney Elizabeth Allen Kreyenbuhl (Stephen), Hillery Cason Allen Richards, Lois Elizabeth Mason, Roswell Fort Mason (Jennifer), Elizabeth Mason Lindsay (Paul). 15 great grandchildren and numerous nieces and nephews. A memorial service will be held at 11 o'clock, February 4, 2021 at the Horne Family Cemetery, Metcalfe, Georgia. In lieu of flowers donations to your favorite charity will be appreciated.

The family of Janet Horne Lanier McLendon created this Life Tributes page to make it easy to share your memories.