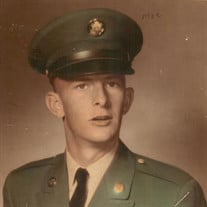 Jerry Nolan Atkinson, age 73, of Thomasville passed away on March 10, 2022, at Archbold Memorial Hospital. Jerry was born in Meigs on February 17, 1949, a son to the late James and Willie Mae Atkinson. He served in the Army during the Vietnam... View Obituary & Service Information

The family of Jerry Nolan Atkinson created this Life Tributes page to make it easy to share your memories.

Jerry Nolan Atkinson, age 73, of Thomasville passed away on March...

Send flowers to the Atkinson family.