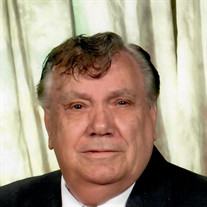 On Tuesday, August 18, 2020, Dean Copeland, loving husband, father of two children, and grandfather of three children, passed away at the age of 80 from lung cancer. Dean left this world and entered heaven as he hoped----at home, in his bedroom, asleep, surrounded by the family he loved, and who loved him in return. Dean was born in Greenville, MS to Frank and Irene Copeland. On March 13,1959, he married Virginia H. Copeland. Although they married on “Friday the 13th”, he considered himself lucky and blessed to have 61 years of marriage to the love of his life. They raised two children, Dean Copeland Jr. and Kim C. Weckwert. Dean was self-employed as a wholesaler with Horne Candy Company, and then for himself for more than 20 years. He was a member and Emeritus Master Mason of Thomasville Lodge No.369 for 37 years. Dean had a passion and a gift for cooking. After he retired, he found his true calling as the award-winning executive chef for Federwild Plantion. He created signature dishes such as Deer Hash, Federwild dip, and Chef Dean’s Prize-Winning Peach Cobbler. Chef Dean was often asked for his recipes by friends, and plantation guests. He generally obliged them by giving them “A” recipe, but not “The” recipe. Saying “If we all cooked alike, then life would be boring.” In truth, he was so secretive with his recipes that you never knew if you had been given the “real” recipe, or a “version” of it. The real recipes are now held by a select few so Chef Dean’s legacy lives on. As passionate as Dean was about the food he created, it paled in comparison to the joy he derives from his three grandsons, Trey, Erik, and Christian. Papa never missed a baseball, football, or soccer game they played. He taught them things about life, love, the Lord, liberty, appreciating good food, how to fish, run bases, make leather belts, kick a field goal, tell a good joke, and to never spit into the wind. He taught them how to drive a stick shift, and even let them drive from his home to his small country church and back to get in practice for their driver’s license tests, even if it was 4 years before any of them would be eligible to legally drive. After all, they were practicing driving back and forth to the Lord’s house, so how could the law of man object? Dean loved shooting pool, playing Rummy and other card games with his wife. Even though he could not carry a tune in a bucket he loved Southern gospel quartet music, but not as much as he loved to hear his daughter sing, or his wife play piano at church. Dean loved banana pudding. Not the kind using instant pudding, but the real stuff. The kind you baked in the oven. He loved Coca-Cola that came in a glass bottle, and not those new-fangled tin cans or plastic bottles. He loved bacon. In fact, he never met a pig he did not like or could not cook. Dean came to love hunting because it was a sport he could share with his grandsons, and no running or pushups were involved. However, he loved fishing with them even more. He loved his country and president Donald J. Trump too. Dean hated macaroni & cheese, flip flops, telemarketer calls, pretentious “Northern” food, and hypocrisy. Not necessarily in that order. In addition to his family, Dean loved the Lord. He loved his wonderful church family, and his faithful friends. He spoke his mind and expected others to do the same. He was real and he respected authenticity. He was known for his quick wit and sense of humor, his infectious laugh, his generous spirt, and his killer food. Our loss is heaven’s gain. Dean was preceded in death by his father and his mother, sister, Betty Faye, brothers, James and Frank. He is survived by his wife, his son and daughter, their spouses, Coral and Karl, his three grandsons and his baby sister, Sara. A graveside funeral service for family and close friends will be held on Saturday, August 22nd, 2020 at Barnett’s Creek Baptist Church at 10 o’clock a.m.

On Tuesday, August 18, 2020, Dean Copeland, loving husband, father of two children, and grandfather of three children, passed away at the age of 80 from lung cancer. Dean left this world and entered heaven as he hoped----at home, in his bedroom,... View Obituary & Service Information

The family of Jimmie Dean Copeland, Sr. created this Life Tributes page to make it easy to share your memories.

Send flowers to the Copeland family.