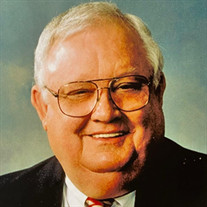 Graveside services for Wayne Dollar, 89 of Ochlocknee will be held at 10:00 am, Saturday, August 21, 2021 at Big Ochlocknee Baptist Church Cemetery. Rev. Ralph Fudge will officiate. Mr. Dollar passed away August 16th. He was born May 23. 1932 in Climax, Georgia to W.B. and Marie Dollar but was raised by his grandparents, Maude and Andrew Dollar following his mother's death when Wayne was only two. He attended Climax School and enjoyed being on the basketball team. After high school graduation in 1951, Wayne joined the United States Air Force and proudly served during the Korean War as a cryptographer until 1955. Upon returning from Korea, Wayne worked for Mineral and Chemical in Decatur County, Georgia before enrolling in Abraham Baldwin Agricultural College. He graduated in 1959 from ABAC and moved to Athens to continue his education at the University of Georgia. He received his B.S. in Agriculture from UGA in 1961. Mr. Dollar served as a County Agent in Bulloch County through the University of Georgia Cooperative Extension Service from 1961-1968. He then went on to work for Farm Bureau as Field Services Director from 1969-1971. In 1971 he began farming in Ochlocknee Georgia and grew corn, soybeans, peanuts, tobacco, watermelons, and pecans while also raising beef cattle. It was during this time he served as a Thomas County Commissioner, President of the Thomas County Livestock Association, and President of the Thomas County Farm Bureau. Mr. Dollar was elected President of the Georgia Farm Bureau in 1994 and served six terms before retiring in 2006. He is a member of Big Ochlocknee Baptist Church where he served as a deacon. Mr. Dollar is predeceased by his wife of 43 years, Odessa Griffin Dollar and grandson Jason Wester. He is survived by his wife Jean Betts Dollar of Moultrie GA., and children, Mike (Jan) Dollar of Claxton, GA, Patsy Wester of Tallahassee, FL, Mary (Ed) Smith of Bainbridge, GA, Ann (Jerry) Slocumb of Hartsfield, GA, Beth (Don) Smith of Dothan, AL, Grandchildren, Michala Dollar, Shelby Dollar, and Alyssa Dollar all of Statesboro, GA, Rusty (Jennifer) Smith of Claxton, GA, Shane (Katie) Slocumb of Hartsfield, GA, Kelli (Rich) Welser of Jacksonville, FL, Jesse (Terra) of Headland, AL, Suzanne Barfield of Dothan, AL, Donnie (Shannon) Smith of Eufaula, AL, Nick (Tia) Smith of Kennesaw, GA, Amber (Brett) Conoly of Watkinsville, GA and 17 great-grandchildren. A viewing will be held from 1-6pm, Friday at Allen & Allen Funeral Home. Family and friends are invited to visit his online tribute page at www.allenfh.com

Graveside services for Wayne Dollar, 89 of Ochlocknee will be held at 10:00 am, Saturday, August 21, 2021 at Big Ochlocknee Baptist Church Cemetery. Rev. Ralph Fudge will officiate. Mr. Dollar passed away August 16th. He was born May 23. 1932... View Obituary & Service Information

The family of John Wayne Dollar created this Life Tributes page to make it easy to share your memories.

Graveside services for Wayne Dollar, 89 of Ochlocknee will be...

Send flowers to the Dollar family.