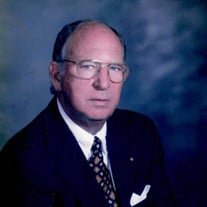 John Lawrence Glenn, Jr., 84, passed away peacefully at home, surrounded by his family. A native of the Hinsonton community in Mitchell County, Georgia, John and his wife, Pat, retired to Thomasville in 1992, after which John became a “professional volunteer”. As a member of All Saints Episcopal Church, he served on its Vestry. A member of Glen Arven Country Club, he served on its Board of Governors and was President for two years. He was a member of The Thomasville Entertainment Foundation, Inc., serving on its Board of Trustees, and as President for a total of six years. He was a member of the Board of Trustees for Thomas University for more than 20 years, and served as Chairman of its Board of Trustees. As a Rotarian, he has served The Rotary Club of Thomasville as a Board member and as President. He is a Paul Harris Fellow, a Paul Harris Society member, and a major donor and Bequest Society member of the Rotary International Foundation. His love for golf led to his involvement in the Georgia State Golf Association where he participated in course rating, officiating tournaments and was elected to the Board of Directors, serving on its Executive Committee and as Chairman of the Finance Committee, as Secretary-Treasurer, and then as a Senior Director. Golf also took him on trips to play in Ireland, Scotland, England, Spain and Italy. After graduating from Pelham High School, John received a BA degree from Emory University, did graduate studies at Georgia State University and is a graduate of the Stonier Graduate School of Banking at Rutgers University. He enjoyed a 32 year banking career, concentrating in Investments, Investment Banking and Asset Management. He gave back to the profession, serving as Chair of the Investment Banking Committee of the Florida Bankers Association, as a Board member of the Dealer Bank Association and as a member of the Municipal Securities Rulemaking Board, which is a congressionally mandated organization to promulgate rules for the municipal securities industry. John’s banking career began at the Trust Company of Georgia, Atlanta; after which he spent time at NCNB in Charlotte, NC, Trust Company of Florida, The Boston Company of the Southeast, Sun Banks of Florida, Orlando, and Sun Bank/South Florida N. A., Fort Lauderdale, a SunTrust Inc. bank. He was Vice Chairman of the bank at his retirement. While in Fort Lauderdale he served on the boards of the Philharmonic Orchestra of Florida and the Fort Lauderdale Opera. He was predeceased by his parents, John Lawrence and Lavincia Joiner Glenn, as well as his stepmother Lura, sisters Joyce Wingate and Marijane Yates, brother Sonny and brother-in-law Joe Wingate. He is survived by his wife and best friend Patricia Scarborough Glenn, whom he met at Emory in 1958. They were married on June 4, 1961, in Elberton, GA. He is also survived by his daughter, Laura Patricia Glenn and her partner Stephanie Schwartz of Tallahassee, son John Lawrence Glenn, III and his wife Dani, grandchildren John Lawrence Glenn, IV, Darby Scarborough Glenn, Jensen Leigh Glenn and Kelli Smith of Lake Worth Florida, brother, Joe, sister Cindy Mobley (James), sister-in-law Betty Glenn and brother-in-law Charles Yates. He is also survived by many nieces, nephews, grandnieces, grandnephews and cousins. A memorial service will be held at All Saints Episcopal Church in Thomasville, GA, on Friday, July 9, at 11:00. His remains will be interred in the All Saints Memorial Garden, which he was instrumental in creating. In lieu of flowers a contribution may be made to All Saints Episcopal Church or to an organization of your choice.

John Lawrence Glenn, Jr., 84, passed away peacefully at home, surrounded by his family. A native of the Hinsonton community in Mitchell County, Georgia, John and his wife, Pat, retired to Thomasville in 1992, after which John became a &#8220;professional... View Obituary & Service Information

The family of John L. Glenn Jr. created this Life Tributes page to make it easy to share your memories.

Send flowers to the Glenn family.