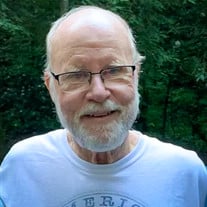 John White spent the first five years of his life in Savannah, GA, before moving with his family to Columbus, GA, where he lived until he joined the United States Navy at the age of 18. John served alongside (as always) his identical twin brother Jack, as a radarman aboard the USS Independence during the Vietnam War. His service in the Navy resulted in a Navy Unit Commendation Medal, a National Defense Service Medal, and a Vietnam Service Medal with Bronze Star. After his tour of duty in the Navy was complete, John received an Honorable Discharge, and returned to Columbus, GA, where he enrolled at Columbus State University and received a bachelor's degree in Criminal Justice. John served his hometown as a police officer for 5 years before joining the Georgia Bureau of Investigation as a Special Agent. Over a career spanning 30 years, John served in multiple regions before settling down with his family in Thomasville, GA. When his career ended in retirement he was the Assistant Special Agent in Charge. As Agent 50, John was a determined, meticulous, and thorough investigator. Besides making him excellent at catching criminals, John's attention to detail struck fear into the hearts of many young agents when he swapped his coat and tie for a set of coveralls during vehicle and equipment inspections. In his younger days, John was an avid runner. In his older days, John's primary race was a spiritual one. John was a faithful member of First Baptist Church where he enjoyed learning to better follow Christ as a member of Howard Floyd's Sunday School class. If that wasn't enough Bible study, his Wednesday morning group would help tide him over. When he wasn't serving others through his church community or as a law enforcement officer, John was serving through membership in the Kiwanis Club. You have to flip a lot of pancakes to get tennis elbow. Upon retirement, John achieved his lifelong dreams of hiking the Appalachian Trail and owning an Airstream (6348). The mountains called and John answered. Sadly, John contracted COVID-19 while camping with his friends in the mountains of Tennessee and was hospitalized upon returning home. John lived a full and meaningful life here on Earth but is now enjoying an even better life in Heaven. John was preceded in death by his parents, Harold L. White and Martha Best White. He is survived by his older brother Sam White (Mildred) of Columbus, GA, and his twin brother Jack White (Sherry) of Perry, GA. John also leaves behind his daughter Jennifer Marcum (Steve) and son Floyd White (Jessica) both residing in Thomasville, GA. His grandchildren Katie Marcum, Brennan White, and Margaret White will miss their Grandaddy's easy-going kindness. His high-maintenance dog, Skeeter, will also miss John's devotion. At noon on Wednesday, August 11, 2021, a funeral service will be held for John at Andersonville National Cemetery (Andersonville, GA) according to his wishes. Dr. Jimmy Clanton will make John proud with his skillful oratory. In lieu of flowers, John would think it was terrific if you made donations to support the ministries First Baptist Church of Thomasville, GA, (fbcthomasville.com/give), or to the Friends of the Smokies (friendsofthesmokies.org/donate).

John White spent the first five years of his life in Savannah, GA, before moving with his family to Columbus, GA, where he lived until he joined the United States Navy at the age of 18. John served alongside (as always) his identical twin brother... View Obituary & Service Information

The family of John Gaines White created this Life Tributes page to make it easy to share your memories.

John White spent the first five years of his life in Savannah,...

Send flowers to the White family.