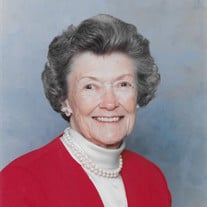 Juanita "Nita" F. Dickey of Thomasville, 101, passed away on Thursday, April 14, 2022. She was born on April 6, 1921 in Metcalf, GA to the late William Walter Futch And Georgia Maryland Foy Futch, and was the youngest of eight children. Nita was married to Russell E. Dickey for 37 years before his passing on January 26, 1983. She was also preceded in death by her brothers, Samuel Futch, Thomas Futch, Eli Futch, George Herman Futch, William Foy Futch, Watkins Futch, and sister Maryland Futch Holland. Nita is survived by daughter, Jan Dickey-Chiofolo (Joe) of Jacksonville, FL; Grandson, Jason Goolsby (Candice) of Lowndesboro, AL; Granddaughter, Robin Tillery (Stan) of Jacksonville, FL; Great Grandchildren Kaleb Tillery, Emalee Tillery, Alex Goolsby, Daniel Goolsby, Connor Goolsby, Aubree Goolsby, Allie Goolsby and many other nieces, nephews, friends and extended family. Nita and her family are especially grateful to Karla Barnes for her friendship and support over the last 10 years. Nita graduated from Thomasville High School in 1939 and started working at the Times-Enterprise newspaper. In 1955, she began working as the Office Manager for WCTV television studio and was promoted to Executive Sales Assistant until her retirement in 1983. She began volunteer work and was instrumental in organizing the first women's division of the Thomasville-Thomas County Chamber of Commerce. During that time she began work with the "Stay and See Thomasville" organization, a division of the Stay and See Georgia in America concern. Included in her civic duties, she has served with The March of Dimes National Foundation as Tri-County Chairman for the Thomasville area and was Christmas Seal Chairman for the Georgia Lung Association. Nita was a long time member of St. Thomas Episcopal Church and served on their Altar Guild for more than 30 years. A graveside service will be held at Laurel Hill Cemetery on Tuesday, April 19, 2022 at 2:00 PM. The family will receive friends prior to the graveside service at Allen and Allen Funeral home from 12:30 PM - 1:30 PM. In lieu of flowers, donations may be made to St. Thomas Episcopal Church, Bethany Hospice, or any organization of your choice.

Juanita "Nita" F. Dickey of Thomasville, 101, passed away on Thursday, April 14, 2022. She was born on April 6, 1921 in Metcalf, GA to the late William Walter Futch And Georgia Maryland Foy Futch, and was the youngest of eight children. Nita... View Obituary & Service Information

The family of Mrs Juanita "Nita" F Dickey created this Life Tributes page to make it easy to share your memories.

Send flowers to the Dickey family.