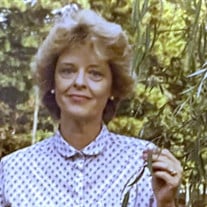 Kay Wildman Sterling joined her Lord and Savior on May 29, 2021 at the age of 92, after a long and full life. Kay was born May 7th, 1929 to parents Wayne and Reva Wildman. As a child in Sully, Iowa, Kay developed passions for dancing and reading, and her love for learning would go on to enrich every aspect of her life for decades to come. She graduated from the University of Iowa, where she was active in several student organizations, including the Pi Beta Phi sorority. In 1951, she married Dr. Arthur H. Sterling, with whom she raised four sons: Scott, Eric, Brett, and Blake. The family moved to Thomasville in 1965 for warm weather! Kay enjoyed multiple careers in the course of her working life. She started as a middle school teacher in Illinois, then served as an instructor at Birdwood College (now Thomas University). Later she enjoyed a successful career with First Thomasville Realty where she had wonderful friendships with colleagues and clients alike. Her love for people also extended to her time as a Sunday School teacher at First Baptist Church. After the death of her husband Art in 1982, Kay relocated to Atlanta where she trained real estate professionals before eventually becoming a financial planner. After retirement Kay moved to Crescent City, FL and found a new calling for the next ten years as a Guardian Ad Litem, advocating in court on behalf of children from troubled homes. During those years, Kay served actively in the local First Presbyterian Church. In 2004, Kay moved to Tallahassee, and was a member of Killearn Methodist Church while also making many friends at the Tallahassee Women's Newcomers Club. She eventually returned to her roots in Thomasville, to live the rest of her days in the community that had played such a formative role in her family's life. Kay Wildman Sterling was preceded in death by sons Eric Sterling and Brett Sterling. She is survived by son Blake Sterling of Fayetteville, GA; son Scott Sterling and his wife Lynn of Thomasville; grandchildren: Jennifer Sterling Sieben (Anthony) of Thomasville; Jeffrey Sterling of Thomasville; Sarah Sterling Thurston (Ike) of Chattanooga, TN and Emily Sterling of Aspen, CO; and six great grandchildren. Kay's friends are invited to join family for an informal drop-in gathering on Wednesday, June 16 from 10:30 AM till 12 noon at the home of Scott and Lynn Sterling at 101 Imperial Drive in Thomasville. Donations may be made to Thomas University in lieu of flowers.

Kay Wildman Sterling joined her Lord and Savior on May 29, 2021 at the age of 92, after a long and full life. Kay was born May 7th, 1929 to parents Wayne and Reva Wildman. As a child in Sully, Iowa, Kay developed passions for dancing and reading,... View Obituary & Service Information

The family of Kay Sterling Ford created this Life Tributes page to make it easy to share your memories.

Send flowers to the Ford family.