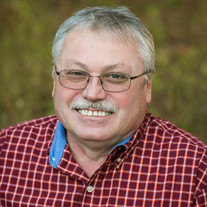 Kenneth Carl Harstel, 62, of Thomasville, Georgia, passed away on April 27, 2022 at John D. Archbold Memorial Hospital surrounded by his wife and children. Born June 27, 1959 in Jamestown, Ohio, Kenny was preceded in death by his parents, Robert and Juanita Harstel and his brother, Rick Dean Harstel, of Cedarville, Ohio. Kenny graduated from Cedarville High School in 1977 and subsequently attended Eastern Kentucky University and Ohio State University. Soon after he met Richalei Wright and they were married in 1981. Also in 1981 he joined Vernay Products and began what would become a distinguished career. He was a key member of the management team that established the marine products division of Vernay which was relocated to Thomasville in 1989. During those same years, Kenny and Richie were blessed with three daughters - Sara, Lyndsey, and Meagan - whom he proudly referred to as “his girls”. Kenny’s career progressed as the Vernay Marine Division became Centek Industries, becoming Vice President of Operations and a shareholder of the company. Kenny led a life filled with joy and laughter. His lightning fast wit and mischievous good natured sense of humor were his trademark. His primary love was his family and he cherished the time he had with his wife, his daughters, and their families. At work, he made everyone there feel like family, too. An admired manager, he was a strong and compassionate leader who inspired people to be the best possible version of themselves, Kenny is survived by his wife of 41 years, Richalei Wright Harstel, his daughters, Sara Harstel Aldridge (Grant), Lyndsey Harstel McVay (Lee), and Meagan Harstel Moss (Travis), all of Thomasville. Other survivors include his grandchildren: Kenley Claire Aldridge, Chloe Len Aldridge, Addison Leigh McVay, Harper Dani Moss, and Holden Reid Moss of Thomasville, and his sisters Debbie Johnson, Cindy Heightman, and sister-in-law Connie Harstel, as well as a host of beloved nieces and nephews. Visitation will be held on Saturday, April 30 from 4 to 6 p.m. at Allen and Allen Funeral Home in Thomasville. A memorial service celebrating his life will be held on Sunday, May 1 at 2:00 p.m. In lieu of flowers donations in his memory may be made to Never Lost, a child advocacy charity based in Thomasville (1835 Smith Ave., Thomasville, GA 31792 or neverlost.org). For livestream please click here https://www.youtube.com/channel/UC0QOwYXWKQpPzGujT9YmRBw

Kenneth Carl Harstel, 62, of Thomasville, Georgia, passed away on April 27, 2022 at John D. Archbold Memorial Hospital surrounded by his wife and children. Born June 27, 1959 in Jamestown, Ohio, Kenny was preceded in death by his parents, Robert... View Obituary & Service Information

The family of Kenneth Carl Harstel created this Life Tributes page to make it easy to share your memories.

Send flowers to the Harstel family.