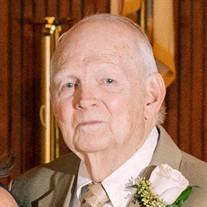 ﻿Services for Larry Jennings Bryant, Sr. will be held on Wednesday, June 22, 2022, at 11:00 a.m. at Allen and Allen Celebration of Life Chapel. His long-time friend, Bill Piland will officiate. Mr. Bryant passed away on June 13, 2022, at his residence. He was born on May 13, 1940, in Thomasville, Georgia. He was the son of the late William Jennings Bryant and Ima Alligood Bryant. Mr. Bryant was married for almost 59 years to the love of his life, the late Jacqueline Clark Bryant. He graduated from Thomasville High School and attended Birdwood and Valdosta State University. As a young man, he gained an impressive job as manager at Interstate Theatre overseeing their five theatre locations. This sparked his love and intrigue of the movie world, and the characters on the big screen. He loved collecting movie memorabilia, and even met Roy Rogers. He had a love of horses and all things western. I guess you can say he was a cowboy at heart! Through the years his management career continued to thrive, leading him to start his own successful career as an upstanding business owner in the community. Traveling out West and to Hawaii with his children, were among his favorite adventures. Music was another one of his loves. While he appreciated all the great singers in his day, no one compared to Elvis! There was a soft spot in his heart for the neighborhood stray cats that managed to find his home, and he loved taking care of them. His favorite times were spent with his good friends and family and telling his captivating stories, but we know he has never been happier than he is today! He is survived by his children, Mark J. Bryant and wife Melinda, Carey Bryant and wife Chrissie all of Thomasville, and Crystal Stryker and husband Rob of Albany; grandchildren, Ian Bryant, Hayley Hill, Courtney Griffin, Bailey McCullers, Seth McCullers, Noah Bryant, Eva Bryant, Kylie Bryant, and Kaitlyn Bryant; great-grandchildren, Chris Hill, Rhett Hill, Daniel Griffin, Jeremiah Griffin, Nora Griffin, and Hudson Griffin; and brother, Bart Bryant and wife Becky of Thomasville. Mr. Bryant is preceded in death by his son, Larry Jennings Bryant, Jr., and brothers, Billy Joe Bryant and Marshall Patton Bryant.

The family of Larry Jennings Bryant Sr. created this Life Tributes page to make it easy to share your memories.

﻿Services for Larry Jennings Bryant, Sr. will be held on Wednesday,...

Send flowers to the Bryant family.