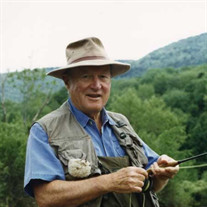 Leigh is remembered for what he built, stood for, shared, taught and handed down. He was first and foremost an outdoorsman: a love he inherited from his mother. He was an acute and accurate observer of nature, spending every moment possible... View Obituary & Service Information

The family of Leigh Perkins created this Life Tributes page to make it easy to share your memories.

Leigh is remembered for what he built, stood for, shared, taught...

Send flowers to the Perkins family.