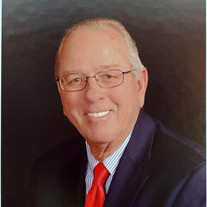 Funeral services for Lloyd Jackson (Jack) Megahee will be ar 2PM Monday, November 15, 2021 at First Presbyterian Church . Dr. Tim Filston will officiate. Mr. Megahee passed away on November 9, 2021. He was born February 14, 1944, in Thomasville, GA to Lloyd H. Megahee and Sally Jackson Megahee. He was the younger brother to Jane Megahee Sasser who preceded him in death. Jack attended Thomasville Public schools, Emory at Oxford University and graduated from the University of Georgia Business School with a Bachelor’s Degree in Marketing. While attending the University of Georgia he was a member of Pi Kappa Phi Fraternity. Jack was in the ROTC while in college and served four years in The United States Air Force as an officer. He achieved the rank of Captain and served two tours in Vietnam. After serving in the military, he returned home to run the family business, The Megahee-Speight Auto Parts Company, a local business in South Georgia and North Florida. In the early 1990’s he made a career change, signing on as a captive agent with GE Capital Assurance, Specializing in Long Term Care insurance. Jack quickly became one of the top agents in the country, winning the National Rising Star award in his first year. He subsequently achieved the company’s highest honor, the Leading Producers Award for many years. These achievements allowed he and his wife to travel to many award conferences which included Hawaii, London, Paris, Costa Rica, and Cancun. His hard work led him to reach the Long-Term Care Million Dollar Round Table. It was important to Jack to help protect families financially from the burden of sickness and disability. After retiring, Jack was called again to serve as a reservist for the Federal Emergency Management Agency. He supported many disaster survivors while deployed all over the United States. Jack understood the key to happiness was helping others and his only regret was he didn’t have more time to do so. Jack is survived by his wife, Kathryn (Kathy) Langley Megahee. They married on June 10, 1979 at First Presbyterian Church of Thomasville. Jack is survived by two sons. Bradley Jackson Megahee of Ridgeway, CO who has three children Bradley Jackson II, Patrick Lee, and Madison Constance. Jamison Scott Megahee of Highland Village, TX who is married to Mollie and they are the parents to Landrie Kate and Jamison Langley. He is also survived by brother-in-law Dr. Robert H. Sasser of Swainsboro, GA who was like a big brother to him. He was loved and will be missed by the Sasser and Langley Family Members. Jack has always been into sports growing up and the YMCA was his second home, playing peewee football, basketball, and baseball. Golf quickly became his greatest passion that lasted over sixty-five years. A lifelong member of Glen Arven Country Club where he served on its Board of Governors and was a Junior and Senior Club Champion. He also was the head coach for the Thomas University Golf Team for many years. When he wasn’t playing golf, you could find him at one of the nearby state parks camping and fishing. His love of camping was passed on to his two sons growing up who spent countless hours by the campfire. Jack was a lifelong member of First Presbyterian Church and served as a Deacon. In Lieu of Flowers please make a donation to FPC Partnership – (Utilities and Rent Assistance Program) at First Presbyterian Church of Thomasville 225 East Jackson Street, Thomasville, GA 31792

The family of Lloyd Jackson Megahee created this Life Tributes page to make it easy to share your memories.

Funeral services for Lloyd Jackson (Jack) Megahee will be ar...

Send flowers to the Megahee family.