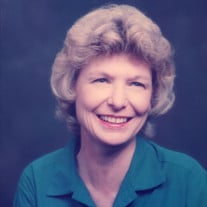 Marie Dahne Moncier Murphy passed away on December 27, 2020 at the age of 84. She was born in Morganton, North Carolina on February 18, 1936 to Edna Hendricks Dahne and Henry Dahne. She grew up and finished high school in Morganton. She attended The University of Tennessee in Knoxville, was a member of the sorority Pi Beta Phi, and graduated in 1957 Cum Laude and Phi Beta Kappa with a degree in Elementary Education. While at UT, she met and married James C. Moncier, Jr. in 1955 They had two children, James C. Moncier, III and Martha Marie (Mimi) Moncier. The family initially lived in Knoxville, moved to Birmingham in 1968, and to Pensacola in 1972. While the marriage ended in divorce, the two maintained a good relationship. She married her second husband, Conrad Bruce Murphy in 1991 and had a close relationship with his four children. Marie taught at several schools during her career including Sequoyah Hills Elementary in Knoxville (3rd and 5th grades). She was a longtime 5th grade teacher at Scenic Heights Elementary in Pensacola until she retired. Marie enjoyed traveling and did so extensively in the United States, Asia, and Europe. She also treasured going back to Morganton annually to visit with family and friends. She was preceded in death by her parents, both husbands, and Bruce’s daughter Candace Murphy Stewart. She is survived by her son James and his wife Carmen Vargo-Moncier, of Madison, AL, her daughter Mimi and her husband Alan Lewis of San Francisco, CA, and Bruce’s children, Marsha Murphy Himel of LaGrange, GA, Bonnie Murphy Hortman of Coolidge, GA, and Steven S. Murphy of Thomasville, GA. A private graveside service will be held in Thomasville, GA. Due to COVID-19 concerns, no visitation will be held. In lieu of flowers, the family requests donations be made to the Alzheimer’s Association.

Marie Dahne Moncier Murphy passed away on December 27, 2020 at the age of 84. She was born in Morganton, North Carolina on February 18, 1936 to Edna Hendricks Dahne and Henry Dahne. She grew up and finished high school in Morganton. She attended... View Obituary & Service Information

The family of Marie Dahne Murphy created this Life Tributes page to make it easy to share your memories.

Send flowers to the Murphy family.