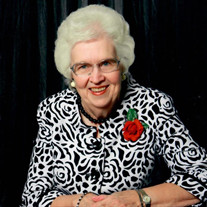 Funeral Service will be held for Maxine Gay McMillen at 2:00 P.M. on April 1, 2022, at Allen & Allen Celebration of Life Chapel. Interment will be at Laurel Hill Cemetery. Visitation will be from 5-7 P.M. on Thursday also at Allen & Allen Celebration of Life Chapel. Maxine Gay McMillen was born the third of four children to Troy Barnard and Cleo Barnard Moore in Pavo, Georgia on Thursday, April 9, 1936. She was ushered into the presence of her Heavenly Father and her Lord and Savior Jesus Christ, Sunday, March 27, 2022. But more than where she was born or when she left this world was how she lived her life and loved those whose lives she impacted so wonderfully. Her family wants her to be remembered for the content of her character. A compassionate and gentle woman who loved the Lord, Maxine gave of herself: her time; her skills; her love of the ministry; and most important her love of her Savior Jesus Christ and her family. It was her life’s ambition and work to be a Godly influence on her family and those who crossed her path. It would be impossible to talk about Maxine without also mentioning her brothers, Lonzo (Bernice) Barnard, Glenn (Shirley) Barnard, and Winifred (Margaret) Barnard. Maxine was the third of four children and the only girl. Her mother and brothers treated her like royalty and loved and respected her deeply all of their lives. She loved each of them with equal love and compassion and invested in them and cared for each of them until each of them left her behind. Maxine is now in Heaven with those who she loved dearly and none more so, than her first husband and father of her children, Owen Gay, and her son, Roger Gay. Maxine leaves behind her second husband, who God brought into her life in her latter years, Cham McMillen. Maxine has five children, one is in Heaven and four remain here to carry on the legacy that Owen and Maxine prepared for them, Randall (Athena) Gay, Cecile (Ben) Westmoreland, Celestine (Mike) Weaver, and Carla (Jeff) Crosby. Maxine has nine grandchildren who are dear to her heart, Ben (Allaceson) Westmoreland, Jr, Ryan (Jenn) Westmoreland, Adrienne (Aaron) Salle, Kelly Chastain (Jason) Sanders, Alaina (Jacob) Riggs, Amanda (Chris) Chastine, Courtney Davis, Thomas (Catherine) Crosby, and Jacob (Anna) Crosby. Maxine has a host of great grand children who she identified as her “Treasures”, Ashton Westmoreland, Riley Westmoreland, Ayden Westmoreland, Brody Westmoreland, Ean Burden, Evangeline Salle, Annie Salle, Gentry Salle, Charlotte Salle, Hampton Salle, Scarlett Chastain, Camille Chastain, John Phillip Chastain, Brendon Riggs, Gideon Riggs, Levi Riggs, Lily Beth Riggs, Holly Davis, Hadley Davis, and Quinn Davis. In the passing of Maxine there is a part of our lives that will never be completely whole, but we can find peace and comfort knowing that Maxine is fully healed and rejoicing with her Savior in Heaven. May her life, influence and memory challenge all who knew and loved her to continue to live and love with the same courage and conviction she demonstrated before us.

The family of Maxine Gay McMillen created this Life Tributes page to make it easy to share your memories.

Funeral Service will be held for Maxine Gay McMillen at 2:00...

Send flowers to the McMillen family.