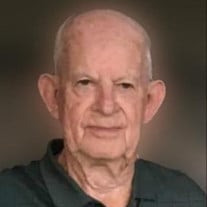 Ned Russell Hall of Thomasville, Georgia formerly of Lucas, Ohio passed away peacefully in his sleep Thursday February 10, 2022 following a short illness. He was 90 years old. Ned was born June 7, 1931 in Ashley, Ohio. He was the son of Russell and Doris (Lee) Hall. Ned was a 1949 graduate of Mansfield Senior High School where he was a member of the boxing team. He held various jobs throughout the years working at Westinghouse Manufacturing, was a route driver for Isaly Dairy in Mansfield, Hood’s Dairy while living in Sarasota, Florida, R.B. Powers in Ashley, Ohio, and most notably was the owner/operator of Sign Craft in Lucas where he was a silk screen printer for 40 years. He also worked as a bus driver for the Lucas Local Schools during a portion of the 1960’s. Following his retirement in the year 2000, he found great joy while working at Sunshine Ace Hardware in Ft. Myers, Florida for nearly 18 years. Ned’s talents and hobbies were many, as in his earlier years he was part owner of 3H’s Race Team where he shared time as a stock car driver with his brother-in-law and a mutual friend. He also served as a basketball statistician for Lucas High School, and was a little league baseball, and flag football coach. He also loved to fish, collect and repair clocks, repaired and restored dolls, as well as dabbled in lapidary work. He also loved doing yard work and had a special appreciation for the roses that he grew and nurtured. Ned was a lover of many sports as he participated in several bowling and golf leagues in his younger days. He also had a deep passion for Ohio State Buckeye Football, and all Lucas Cubs sports. With an eye for art and a beautiful stroke with whatever utensil was in his hand, Ned and a co-worker designed a logo for the Pasadena Tournament of Roses while working at R.B. Powers in Ashley. He also designed and hand painted the bear cub logo that once appeared at center court of the gymnasium of Lucas High School. Always taking pride in his work, and being willing to help others, he hand lettered his nephew’s sprint car, his daughter’s concession trailers, his son’s and other kid’s soap box derby cars, as well as various signs and vehicles in and around the Lucas community. During a portion of the 1970’s and 1980’s he served on the Lucas Board of Public Affairs, Lucas Village Council, and was also Lucas’ first Village Administrator. He is survived by three daughters Karen (Jeff) Blackledge of Lucas, Deb Cooper of Lucas, Robin (Ed) Culler of Perrysville, and son Todd (Pam) Hall of Lucas. 11 Grand Children, 15 Great Grand Children, 4 Great Great Grand Children, two sister-in laws, and numerous nieces and nephews. He is also survived by special friend Marla Turner of Thomasville, Georgia whom he spent the last 22 years with traveling the country. He was preceded in death by his parents, his wife of 47 years Doris Elaine (Mowers) Hall, two brothers Paul “Buster” McGrew and Dean Hall, along with three sisters Ann (Hall) Corum, Katherine (Hall) Hamman, and Billie Jane Hall. A private graveside service for immediate family will be Saturday March 5 in Mt. Zion Cemetery in Lucas followed by a Celebration of Life at the Lucas Community Center following the service.

Ned Russell Hall of Thomasville, Georgia formerly of Lucas, Ohio passed away peacefully in his sleep Thursday February 10, 2022 following a short illness. He was 90 years old. Ned was born June 7, 1931 in Ashley, Ohio. He was the son of... View Obituary & Service Information

The family of Ned Russell Hall created this Life Tributes page to make it easy to share your memories.

Send flowers to the Hall family.