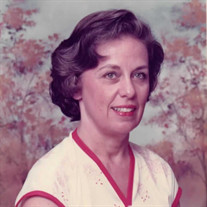 Raquel van der Poll Pope passed away peacefully at her home in Thomasville on November 25, 2021. Born in Buenos Aires, Argentina on April 29th 1930 to Jan Andries van der Poll, electrical engineer from Holland, and Raquel Eloisa Scala-Copella, in 1954 she interrupted a teaching career when she came to America as a Rotary Exchange Student to continue studies in Education at the University of Georgia from which she was awarded a Masters degree in English and Psychology. During this time she was invited to spend the Christmas Holidays with the Will Watts of Thomasville where she met her future husband, Shelby J. "Jack" Pope, Jr. Upon completing her studies, she and Jack were married and they resided in Columbus while he completed the Basic Infantry Officers' Training Course at Fort Benning. While Jack served in Korea their first child, Dr. Eloisa Margaret Pope of Providence,RI, was born; and two years after that their second child, Jackson Andries "Andy" Pope (Martha "Marti"), electrical engineer of Chicago, was born. Her children reaching school age allowed Raquel to return to teaching, her lifelong love, and she joined the faculty of (then) East Side Elementary School. Eventually Raquel taught at Thomasville High School and their third child, Dr. Paul Albert Pope (Alicia) of Los Alamos, NM was born. Subsequently Raquel taught at Ravenwood Academy and then for many years at Thomas County Central High School from which she entered retirement. A naturalized citizen, Raquel's appreciation for America was far greater than most (before coming to America she had lived in a country ruled by dictators). She greatly valued her citizenship. Raquel's thoughts were always of her family to which she showed unbounded love and generosity, and to the many charities she contributed to; and she bravely bore the cross of her last illness with steadfast devotion to her Lord and Savior, Jesus Christ, her "Pater Nostra" (Our Father), and the Holy Spirit. She is survived by her three children, Eloisa, Andy and Paul, her two devoted daughters-in-law, Martha "Marti" Crowe Pope and Alicia Hale Pope, her five grandchildren, and two great-grandchildren: Flannery Irene Patton (Stephen Crocker), Kristen Lydia Pope, Katelyn Raquel (Jared) Kilbourne, Giulia Isabelle and Andrew Joseph Pope, and Cayden Ellen and Logan Andries Kilbourne. The family would be remiss if they did not thank all who showed love and kindness this past year, especially to her GP of many years, Dr. Calvin Reams, III, and his staff, Dr. Mohammed Khan and the nurses of the seventh floor of the North Tower of Archbold Memorial Hospital, and to those who so ably do their best to keep it clean, neat and polished, and those who man the machines and microscopes,as well as all those who have bestowed its benefits to our community with their time, effort and donations, and very especially to all who have helped make it possible for Raquel to be cared for at home, Ms. Jennie Evans and the staff of Georgia Living at Home, and the nurses and staff of Hospice of Southwest Georgia whose unfailing kindness and guidance will no doubt continue to make our and our loved ones' final struggles manageable...and especially to Andy (and wife Marti) our dear son, who has spent the last year in Thomasville watching over our every need.

The family of Raquel van der Poll Pope created this Life Tributes page to make it easy to share your memories.

Raquel van der Poll Pope passed away peacefully at her home in...

Send flowers to the Pope family.