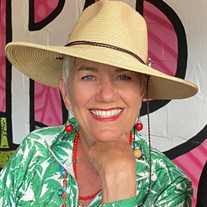 On December 20, 2021 Rebecca Irene Lanier Allen died peacefully at her home surrounded by family and close friends. Rebecca was born on June 25, 1946 in Valdosta, Georgia. She graduated valedictorian from Thomas County Central High School in 1964, received a Bachelor of Arts in History and Criticism of Art from Agnes Scott College in 1968 and earned a Master of Science in Mathematics from Florida State University in 1981. She grew up in Metcalfe and was crowned Thomasville Rose Queen in 1964. While attending college she met and married Jack Vinson Allen, Jr. on December 18, 1965. Upon return to Thomasville, she became the Advertising Director of Neel's Department Store. After their first two daughters were born, she taught math, science and history in the Thomas and Grady County School systems. After their next two daughters were born, she became a Fashion Consultant for The Carlisle Collection of New York from 1988 until 2020. Her effervescent vivacious nature, faith and love of life allowed her to pursue her interests to the fullest, including fox hunting, tennis and dog training for hunt tests and retriever trials. She also enjoyed hunting, reading, traveling, dancing, the outdoors and animals, especially horses and dogs. Her eclectic style showed in her love of art, fashion, entertaining and collecting native plants for landscaping and floral arrangements. She radiated joy and shared her fun-loving personality with those around her. Many thanks to those at John D. Archbold Memorial Hospital, Tallahassee Memorial Hospital and the others who cared for her so lovingly. She was preceded in death by her parents Janet Horne Lanier McLendon, January 2021 and Sidney A. Lanier, October 1979. She is survived by her husband Jack Vinson Allen, Jr., sister Lois Elizabeth Lanier Mason (Roswell), daughters Rebecca Lanier Allen, Irene Hamilton Allen Gleason (John), Sidney Elizabeth Allen Kreyenbuhl (Stephen), Hillery Cason Allen Richards, grandchildren Serena Grace Allen, Kathleen Lanier Allen, Louisa Marie Kreyenbuhl, Edward Allen Kreyenbuhl, Madelyn Cason Richards, James Thomas Richards, Eleanor Jane Kreyenbuhl, Isabelle Irene Kreyenbuhl and numerous nieces and nephews. There will be a private memorial at the Horne Family Cemetery followed by a reception for all those who knew her and her family from 2 until 5 o'clock, December 31, 2021 at Exallo, 1025 Metcalfe Road, Metcalfe, Georgia. Her favorite charities were Nepenthic Society Wild Animal Rescue and Thomasville-Thomas County Humane Society. Donations to those organizations or your favorite charity will be appreciated.

The family of Rebecca Irene Lanier Allen created this Life Tributes page to make it easy to share your memories.