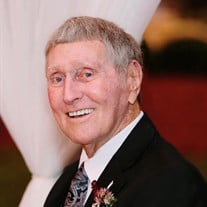 Services for Ret. SGT. Major Ben Ray Foy, 80 of Thomasville will be held at 2:00 PM, Thursday, February 24, 2022 at First Baptist Church of Thomasville. Rev. Terry Hurst, Rev. Ralph Fudge and Jesse Gaines will officiate and interment will follow at Laurel Hill Cemetery. Mr. Foy Passed away February 21, 2022 at Archbold Hospital. Born January 21, 1942 in Barwick, Ga., he was the son of the late Ben H. & Ruby Sherrod Foy. On December 28, 1968, in Merrillville, he married Sabra Kelly Foy, who survives. He was a veteran of the United States Army, enlisting in the Army July 1961, he took basic and advanced infantry training at Ft. Jackson S.C. After training he was assigned to the 1st Calvary Division with duty on the DMZ in Korea. Sergeant Foy returned from Korea in 1963, assigned to Ft. Gordon Ga. as an instructor on a hand grenade range. In 1965 he returned to Korea, and was assigned to the 7th Infantry Division. In 1966 Staff Sergeant Foy was assigned to Ft. Gordon Ga. as a Drill Sergeant. In 1967 he was assigned to the 25th Infantry Division in Viet Nam, where he served as a Platoon Sergeant in the Infantry. He returned to Ft. Gordon in 1968, and was assigned to duty as a Senior Drill Sergeant. In 1970 Sergeant First Class Foy was assigned to the 25th Transportation Company in Korea. Leaving Korea in 1971 he was assigned to Ft. Knox Ky. as a Senior Drill Sergeant. In 1975 he was promoted to the rank of First Sergeant. He was then assigned as First Sergeant of a basic training company. In 1976 First Sergeant Foy was assigned to the 1st Armored Division in Bamberg Germany as First Sergeant in an infantry company. In 1979 he returned to Ft. Jackson S.C. and back to a basic training company. In 1980 he was promoted to Sergeant Major and assigned duty as operations Sergeant Major with the 1st Combat Infantry Training Brigade at Ft. Jackson S.C. In 1981 he was assigned to Marshall University in Huntington W.Va. where he was an instructor in reserve officer training. He received several awards throughout his military career including, Combat Infantry Badge, Expert Infantry Badge, Drill Sergeant Badge, Bronze Star Medal, Legion of Merit Medal, 2 awards of Meritorious Service Medal, purple Heart for wounds received in Viet Nam, 2 Army Commendation Medals, National Defense Service Medal, Army Service Ribbon, 5 Overseas Service Ribbons, 3 Non-Commissioned Officer Professional Development Ribbons, 7 Good Conduct Medals and Viet Nam Cross of Gallantry with Palm, Viet Nam service Medal, Viet Nam Champaign Medal and the Purple Heart. On December,1982 he retired from the Army, and returned to Thomasville. Soon after retiring from the military, he started Foy Construction and developed multiple subdivisions and built over 200 houses. He was a member of First Baptist Church and attended the Harold Jackson Sunday School Class. In his spare time, he enjoyed taking cruises. He is survived by his wife; children, Delisa Schwierling and husband Jim of Huntsville, Ala., Dale Foy of Thomasville, Darin Foy and wife Wendy of Richmond Hill; grandchildren, Caleb Foy, Marissa Cross (Mitchell), Grant Foy, Ben Foy, Chason Foy (Dana) Chandler Foy (Jordon), Jake Higgs (Sydney), Jordan Higgs and John Higgs; Great-grandchildren, Tucker Foy, Mason Foy, and sister, Imogene Weber of Columbia, SC. He was preceded in death by his parents and brothers, Tommy Foy and Johnny Foy and sister, Margie Martin. Memorial contributions may be made to First Baptist Church Building Fund or to Gideon International. The family will receive friends 5-7 pm, Wednesday, February 23, 2022 at the Allen & Allen Celebration of Life Chapel. Friends are invited to visit his online tribute page at www.allenfh.com

The family of Ret. SGT. Major Ben Ray Foy created this Life Tributes page to make it easy to share your memories.

Send flowers to the Foy family.