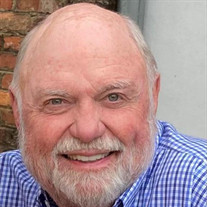 Richard Matthew Delarber Sr. died Sunday May 29, 2022 at Big Bend Hospice House in Tallahassee, Florida, following a brief but merciless illness. Born on October 20th, 1946 in Modesto, California, he was the son of the late John (Jack) Howard Delarber and Jayne Young Delarber. Richard loved orchids and oysters; fishing and flowers; golfing and the great outdoors. He relished St. George sunrises and sunsets. He loved knowledge, giving, tradition and ceremony. He loved sharing those pleasures with others ~ young and old. And stories; Richard loved a good story and loved embellishing one even more. Richard’s greatest loves were for his family, his friends, and his Heavenly Father. Though he was quiet regarding many things, his devotion to the values he held dear were unshakeable. Richard, “Papa” to many, was known for his dynamic spirit, twinkling eyes, genuine smile, and infectious laugh. He was a member of Saint George Island United Methodist Church, and was actively, and excitedly, envisioning its growth. Richard was immensely generous, and always eager to give to family, friends, and strangers alike ~ often employing Jane or Stacey for his spur-of-the-moment ideas. His generosity was never about recognition, but rather his kind, quiet way of sharing the blessing of his full life with others, all for God’s glory. He is survived by his loving wife, Jane Daniel Delarber (his beloved Sweetie), his children whom he loved dearly ~ daughter, Stephanie (Stacey) Delarber Forsyth, son, Richard Matthew Delarber Jr. (Jennifer); grandchildren, who were his pride and joy, Grace-Marie Howard (Luke), Dallas Forsyth, Smith Forsyth, Logan Delarber, Matthew Delarber; sister Pam Teate (Mike), sister Judy Solovey (David), sister-in-law Emily Downs (Joel), brother-in-law Jim Daniel (Shesh) and numerous nieces, nephews, and extended family members he held dear. In addition to his parents, Richard is preceded in death by his in-laws, Emile Wright Daniel and Wenona Anderson Daniel, who loved him as their own, and his beloved “big black dog”, Cassie. A memorial service will be held Sunday, June 12, 2022, at 6:00pm at Saint George Island United Methodist Church. A reception of celebration and remembrance will follow at his home. On Friday, June 3rd, a private family service and reception was held in Thomasville, Georgia. For those desiring, the family suggests donations be made to St. George Island United Methodist Church in Richard’s memory and honor. (St. George Island UMC 201 E. Gulf Beach Drive, St. George Island, FL 32328.)

The family of Richard Delarber created this Life Tributes page to make it easy to share your memories.

Send flowers to the Delarber family.