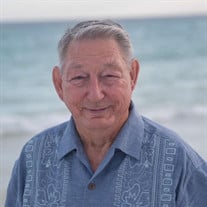 Services for Robert "Bob" Aurice Daniel, Jr. of Thomasville will be held at 11:00 am (EST), Wednesday, June 08, 2022 at Trinity Baptist Church. Pastor Ken Burgess will officiate and the interment will be at Laurel Hill Cemetery. Bob passed away in Tallahassee on June 6, 2022 of complications from a motor vehicle accident. He was being transported, via ambulance, to Augusta University Hospital, when the ambulance was struck by an impaired driver. He was born on July 2, 1940, in Dublin, Georgia to the late Robert Aurice Daniel and to the late Sarah Francis Ferris Daniel. He had the honor of being married three times during his life. He leaves behind his first wife Hattie Daniel Yaw and is preceded in death by his second wife, Sally Cook Daniel and third wife Bluey Bolton Daniel. Bob was an Army Veteran. He served in Germany for three years and in the National Guard. Bob served as a police officer, over thirty years, in Hialeah, FL and Richardson, TX. While serving the Richardson Community he worked, extra-duty, as a security officer and director of traffic at the local high schools and businesses. He became well-known in the city, everyone knew Officer Daniel! He received many letters of recognition from families he served. He was truly a legend on the police force. He enjoyed spending time with his family and friends. He loved working outdoors and with his hands. Specifically, building his house and raising catfish in Murchison, TX; panning for gold in Alaska, New Mexico, and Colorado; riding four wheelers; jet skiing; painting and writing poetry. His faith was strong and he loved Jesus. He served the church in many ways, most recently, as a Sunday School Teacher at Trinity Baptist Church. He is survived by his children: John Daniel (wife Shirley) of Athens, TX; James Daniel of Thomasville, GA; Jeanie Daniel-Martin of Dallas, TX; Jennifer Daniel of Kansas City, MO; and Mindy Murphy-Watson (husband Kevin) of Kansas City, MO. He is survived by his grandchildren: Lauren Skinner (husband Buddy) of Orlando, FL; William Daniel of Thomasville, GA; Zoe Martin of Dallas, TX; Zachariah Martin of Dallas, TX; Jacob Murphy of Fayetteville, AR; Cooper Watson of Kansas City, MO; and Clara Mae Watson of Kansas City, MO. He was preceded in death by daughter-in-law, Renee Daniel. In lieu of flowers, please make donations to Trinity Baptist Church, P.O. Box 154, Thomasville, Ga 31799. The family will receive friends 10-11 am (EST), before the service at the church. The service will be live-streamed on the Trinity Facebook Page- Trinity Baptist Thomasville.

Services for Robert "Bob" Aurice Daniel, Jr. of Thomasville will be held at 11:00 am (EST), Wednesday, June 08, 2022 at Trinity Baptist Church. Pastor Ken Burgess will officiate and the interment will be at Laurel Hill Cemetery. Bob passed... View Obituary & Service Information

The family of Robert "Bob" Aurice Daniel, Jr created this Life Tributes page to make it easy to share your memories.

Services for Robert &quot;Bob&quot; Aurice Daniel, Jr. of Thomasville will...

Send flowers to the Daniel family.