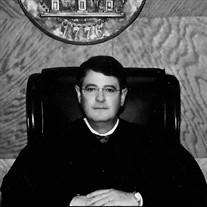 A memorial service for Roy Miller Lilly, Jr will be held at 10:00 am, Friday, August 6, 2021 at All Saints Episcopal Church Roy Miller Lilly, Jr. died at his home on August 3, 2021. He was born in Thomasville on October 5, 1949 to the late Judge Roy M. Lilly and Mary Frances B. Lilly. On May 12,1979, Roy married Eleanor N. Hand Lilly who survives. Roy was educated in the Thomasville City School system graduating from Thomasville High School in 1967. While there, he was a member of the National Honor Society. Roy obtained a BA in English from Emory University in 1971, and a JD from the University of Georgia School of Law in 1974. He served in the Georgia National Guard from 1970 until his discharge in 1976. Roy began his law career in 1974 with what was then known as Alexander, Vann and Lilly where he worked until he started the Trust Department at Commercial Bank in 1982. Thereafter, he worked with the law firm of Altman and Lane, and then maintained a solo law practice until his death. Roy enjoyed opening his law office break room daily for friends to have coffee and visit. This activity lasted for more than 20 years. Roy had the honor of serving as one of the Thomas County Magistrate Judges. He truly valued his relationships with the other Magistrate Judges, the professional staff at the Magistrate Court and the local law enforcement agencies with whom he worked closely. Roy loved history and local historic preservation. He served for years on the Board of Thomasville Landmarks, Inc. including service as its President. Roy was a member of the Archbold Corporation and served on the Archbold Medical Center Foundation Board. One of Roy's greatest joys was service to All Saints Episcopal Church, having been one of its founding members, and to the Diocese of Georgia. His service to the church included functioning as Treasurer for many years and Clerk of the Vestry during All Saints' early years. He had served as Chancellor to the Parish for more than 33 years. Roy was the Lay Reader and Chalice Bearer and served as Senior Warden for several terms. Roy was a member of of the Southwest Georgia Convocational Council for nearly 30 years, having been elected to the Diocesan Council several times and twice holding the Chair of that body. Roy was in his third, four year term as a member of the Diocesan Standing Committee which is the highest office a layman can be elected to in the Episcopal Church. His long time friend, The Reverend Frederick Buechner, recalls that Roy was elected to this body unopposed- to Father Buechner's knowledge, that was the first and only time that has happened. In addition to his wife Eleanor, Roy is survived by his children Mary Lawrence Lilly Lang (Ashley), Roy Miller Lilly, III (Nicole), and his grandson Ashley Pierce Lang, Jr. He is also survived by his sister Lavinia Lilly Krech, brother George R Lilly, II (Nelray) , brother in law John Hand(Lois), nieces, nephews, great nephews and a great niece. In lieu of flowers, please consider donations to The All Saints Episcopal Church Memorial Fund, 443 S Hansell St, Thomasville, GA 31792 or Archbold Foundation, 910 S Broad St, Thomasville, GA 31792.

The family of Roy Miller Lilly, Jr. created this Life Tributes page to make it easy to share your memories.

Send flowers to the Lilly, family.