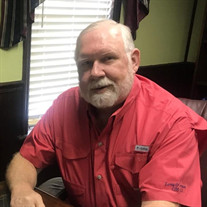 Roy H. Long, C.P.A., passed away in his sleep on May 16th, 2022 at Emory University Hospital in Atlanta, GA. He was 68 years old. The only child of Hayward and Mary Long (nee Myers) of Boston, GA. Roy grew up surrounded by extended family in place of brothers and sisters. He graduated from Thomas County Central High School in the Class of 1971, where he was on the football team and other extra-curricular activities. He then attended Abraham Baldwin Agricultural College before graduating from Valdosta State University in 1974 with a BBA in Accounting. He attended Georgia State University for post-graduate studies in accounting. After starting his career at the Cobb County Board of Education as an auditor, Roy met his soon-to-be wife, Jeanine, while visiting home for the Thomasville First Church of The Nazarene’s 50th Anniversary in 1978. It was Love at first sight, and they married in 1979. Roy and Jeanine moved from Marietta, GA with oldest son, Kevin, to Dallas/Fort Worth, TX in late 1980. Moving back to Thomas County in 1983 with sons Kevin and Benjamin, he became the Corporate Controller of Davis Water and Waste. In 1986 Roy and Jeanine had their youngest son, Gregory. Roy transitioned into public accounting in 1993, and later founded Long & Company CPAs, LLC. Always a Man of Faith, Roy attended the Thomasville First Church of the Nazarene throughout his life and later joined the Moultrie First Church of The Nazarene, where he could most likely be found running or teaching others how to run the sanctuary’s soundboard. He always had a listening ear and freely offered his advice to others. He especially enjoyed having deep conversations with young men about character, life goals, and being a productive, thinking individual in today’s society. Roy always believed in helping others, especially those that are unable to help themselves. In college, he volunteered at the Georgia Sherriff’s Boys Ranch in Hahira, GA. He served as the treasurer of the Treehouse Children’s Advocacy Center in Thomasville for several years. He was an active member of the Thomasville-Thomas County Chamber of Commerce. He joined the Metro Marietta Kiwanis Club in 1974 and was recognized as their Distinguished President in 1979. His love for community service continued when he moved back to Thomasville and joined the Kiwanis Club of Thomasville. He had over 40 years of perfect attendance during his Kiwanis membership and held several positions throughout the 1980s and 1990s. He remained active until his illness in 2021 and was the local club treasurer for over two decades. He served on many club, and state-level committees as committee chair, and was active with Kiwanis International. He never met a stranger and could be located anywhere by the echo of his laughter. Roy loved working with the community and helping his clients, but his greatest love was his family. He is survived by his wife of 44 years, Jeanine, sons Kevin Long (Heather), Benjamin Long, Sr. (Katie), and Gregory Long (Megan), grandchildren Alexander Long (Kevin & Heather), Benjamin Long, Jr and Kaylen Long (Benjamin & Katie), and Allison Long (Gregory & Megan), and great-granddaughter Lilith Long (Alexander). Donations in lieu of flowers can be made to the Kiwanis Club of Thomasville Foundation, The Treehouse Children’s Advocacy Center, or The Moultrie First Church of the Nazarene. To view the service through Livestream, please click this link https://www.youtube.com/channel/UC0QOwYXWKQpPzGujT9YmRBw

Roy H. Long, C.P.A., passed away in his sleep on May 16th, 2022 at Emory University Hospital in Atlanta, GA. He was 68 years old. The only child of Hayward and Mary Long (nee Myers) of Boston, GA. Roy grew up surrounded by extended family... View Obituary & Service Information

The family of Roy H. Long created this Life Tributes page to make it easy to share your memories.

Send flowers to the Long family.