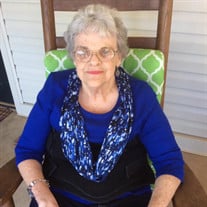 Sue Willis Cleveland passed away peacefully at home on April 8, 2021. She was born October 31, 1938 in Tallahassee, FL to Guy and Margaret Joiner Willis. When she was young the family moved to the Fletcherville community in Thomasville and later moved to the family property on Joiner Road where she currently lived. Sue was a 1956 graduate of Thomasville High School and in 1958 she married James V. Cleveland, who survives. Sue worked at Commercial Bank upon graduating and later was a stay-at-home mom until she returned to work and worked for Dr. Henry S. Pepin until his retirement and at that time, she went to work with Flowers Industries until her retirement. Sue and James have been active members of Dawson Street Methodist Church for over sixty years. Before moving to Dawson Street Methodist, Sue was a member of Beulah Methodist Church where she often played the piano for the services. Sue enjoyed working outside with her plants and was always finding a reason to be outdoors. She also enjoyed trips to the mountains and anytime she could include her grandchildren she would. Until recently she was active in genealogy research and was involved with the local United Daughters of the Confederacy Chapter. For years she and a group of friends played rummy each week. The “card girls” as they were affectionately known were each other’s support and love thru all their families’ triumphs and tragedies. Along with her husband James, survivors include daughters Tish C. Barrett of Valdosta and Linda C. (Alan) McClure of Milledgeville, and a son Jim (Beth) Cleveland of Valdosta. Grandchildren include Jay (Kelly) Barrett of Barwick, Alyssa (Michael) Millsap of Bardstown KY, Drew Cleveland of Valdosta, and Caroline Cleveland of Valdosta. Also, two great grandchildren, Crawford and Carson Barrett, and a sister Margie (Oliver) Jones of Thomasville. Sue is also survived by many in-laws, nieces, and nephews. She was preceded in death by her parents, a sister, Carolyn Willis Mims, a brother Edward Willis, and a grandson Jameson Elliott Barrett. We would like to extend a special thanks to our army of caregivers and the staff from Bethany Hospice. Because of their compassionate care we were able to keep Sue at home for the past several months. Visitation will be Sunday April 11th from 2PM - 4 PM in the Allen & Allen Celebration of Life Chapel. Graveside services will be Monday 2PM at Laurel Hill Cemetery. In lieu of flowers we are requesting any donations in memory of Sue be made to Dawson Street Methodist Church, Linda Solana, 158 Stonebridge Drive, Thomasville, GA 31757 or Bethany Hospice, 2012 East Pinetree Blvd, Suite A, Thomasville, GA, 31792.

Sue Willis Cleveland passed away peacefully at home on April 8, 2021. She was born October 31, 1938 in Tallahassee, FL to Guy and Margaret Joiner Willis. When she was young the family moved to the Fletcherville community in Thomasville and later... View Obituary & Service Information

The family of Sue Cleveland created this Life Tributes page to make it easy to share your memories.

Sue Willis Cleveland passed away peacefully at home on April...

Send flowers to the Cleveland family.