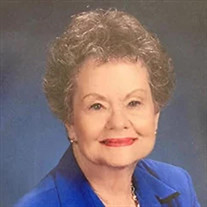 Living a full and faithful life to her Lord, Susie Irene Waters entered the kingdom of heaven on March 12, 2022 in Thomasville, Georgia after a brief illness. Susie was born in Stilson, Georgia (Bulloch County) on October 3, 1932 to the parents of Perry and Vera Edenfield who preceded her in death. She was also preceded in death by her brothers, Herman Edenfield and Avant Edenfield. She married Thomas Waldo Waters, a returning World War II combat infantryman, on November 8, 1947 and they were married 42 years before his passing on November 19, 1989. She is survived by her 4 children, Tommy Waters (Diane) of Smyrna, Georgia, Brenda Kelly of Kennesaw, Georgia, Glen Waters (Susan) of Thomasville, Georgia and David Waters (Holly) of Ellijay, Georgia. She is survived by 11 grandchildren and 12 great-grandchildren. She is also survived by a brother, Gerald Edenfield of Stilson, Georgia and four sisters-in-law: Melvis Edenfield, Savannah, Georgia, Sharon Edenfield, Stilson, Georgia, Doris Lanier, Statesboro, GA and Betty Bowman, Acworth, Georgia. Susie and Waldo left their farm in 1953 and raised their four children in Savannah, Georgia where she was a devoted housewife and stay-at-home mother and later Avon representative. She and Waldo left Savannah in 1972 as their children were leaving the nest and moved to Columbus, Georgia, living in Columbus from 1972-1976; after which they moved back to Savannah. While in Columbus and Savannah, she was employed with the U.S. Public Health Service as a medical records specialist and later the U.S. Social Security Administration in Savannah as the lead court recorder for disability hearings. While living in Columbus, Georgia she was employed as an administrative assistant for the U.S. Army. After Waldo’s death in 1989, she eventually moved to Thomasville, Georgia in 1999 where she continued employment with the Social Security Administration until retiring in her early 80’s! She was one of the best “southern” cooks in South Georgia! She handed recipes down to her children and her grandchildren. She was a very active member of Dawson Street Baptist Church where she had taught Sunday school and was a faithful member for over 20 years. She loved her church and Christian fellowship. She was a true woman of faith who was a giver of her time and money to the Lord’s work. She was selfless and supported and rejoiced in the success of others, especially her husband, brothers, children, and grandchildren. She was a mentor to many she encountered along the way. Susie was also a very faithful prayer warrior and had a sincere burden for everyone she knew to have a true, sincere relationship with Christ. She prayed fervently for her children, grand-children, and great-grandchildren. She was a dedicated, quiet caregiver to shut-ins and residents of nursing homes; often visiting and spreading hope and Christ’s love. She truly lived her faith. She also volunteered at the Crisis Pregnancy Center to counsel young woman. She was an avid, life-long walker, exerciser, and reader and in her later days found great solace and comfort in her books and most especially, the word of God. She never stopped reading and enjoyed using the Thomasville Public Library’s generous services-- even while at Southern Pines Retirement Center. Susie was never one for the spotlight, a faithful servant to Jesus Christ. She prayed that all of her family would receive Christ as their personal savior. She leaves behind a host of life-long friends, a legacy of love of family and a dedication to living and spreading her Christian faith. The funeral service will be held on Thursday, March 17, 2022 at 1:30pm at Old Fellowship Baptist Church with Rev. Tony Pagliarullo and Elder Randy Waters officiating. The pallbearers will be Kristopher Waters, David Brown, Kenneth Kelly, Gerry Edenfield, Matt Ashe and Hunter Hood. The honorary pallbearers will be Sean Kelly and Johnathan Waters. Interment will be in Upper Black Creek Primitive Baptist Church Cemetery. Joiner-Anderson Funeral Home & Crematory of Statesboro is in charge of the arrangements.

Living a full and faithful life to her Lord, Susie Irene Waters entered the kingdom of heaven on March 12, 2022 in Thomasville, Georgia after a brief illness. Susie was born in Stilson, Georgia (Bulloch County) on October 3, 1932 to the parents... View Obituary & Service Information

The family of Susie Irene Edenfield Waters created this Life Tributes page to make it easy to share your memories.

Living a full and faithful life to her Lord, Susie Irene Waters...

Send flowers to the Waters family.