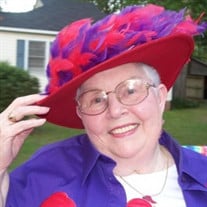 A virtual celebration of the life of Thelma Lenora Dekle Blow will be presented in photography and music, gathered and prepared by her children, grandchildren and great grandchildren. Ms Blow was born October 19th, 1928 and passed away January 18th, 2021. She last resided at Southern Pines that she dubbed "Heaven's waiting room." Claiming to be born in the front room of a yellow house that once stood where East Side Baptist Church, in Thomasville, now stands, she stated that she was born a Baptist and died a Baptist. A graduate of Thomasville Schools, she also attended Birdwood College and Thomas Area Technical School. Her thirty year career with Warners took her to many places including Puerto Rico, Antigua,Costa Rica, Dominican Republic, Ireland, England, Mexico, Vieques, Honduras, Trinidad, Port of Spain as well as many state side plants. She worked in quality control, troubleshooting and sometimes "trouble making" as her co-workers would tell her, sometimes in jest. After retiring in 1989, she and her late husband, Charlie, joined the Wally Bynum Airstream Club and traveled all over the United States, Canada, Prince Edward Island and Nova Scotia. She served as President of the Big Bend Unit during 1994 to 1995. Mrs Blow was a volunteer at Archbold Medical Center for many years, serving at the information desk. Her hobbies included yard sales, estate auctions, collecting depression glass, Madame Alexander dolls, square Dancing, clogging and bowling. She was a Charter Member of the Rose City Red Hatters, five years serving as phone crone and later, Vice Queen, also known as the "Queen of Vice" Mrs Blow was preceded in death by her husband of 60 years, Charles L. Blow Sr, her parents, Bright and Rena Dekle, a brother, C. L. Dekle, a granddaughter, Michelle Hitchcock, a grandson, Solom Castillo.and many very special in-laws, aunts, uncles and cousins. Survivors include a son, Charles L. Blow Jr, (Judy), daughter, Brenda B. Meacham (John) Grandson Ranes Carter, (Heather) Granddaughter, Blace Carter, (Stephen) Great grandsons, Braydon, Christopher, Tyson, Charles Allen, Zachary and Carter. Great Granddaughters, Sky, (Gage) Lacey, and Kayleigh. The icing on her cake was the smartest, prettiest and sweetest great, great grandchildren ever, Ivey Lee, Summer Rose and Charlie Clay. The eldest, Ivey, age 4, sent her "Mamoo" to be with Jesus by saying the Lord's Prayer and The Pledge Allegiance to the US FLag, her choices. Brothers include James B Dekle, Waymon Dekle (Carolyn) and Bill Dekle (Donna). Her only sister is Lois Anderson.(Melvin) . She also has many beautiful souls in the form of cousins, nieces and nephews, that loved having a good laugh with "Aunt Thelma" Her BFF was Moriah, an African Grey Amazon, and her companion for over 20 years. Moriah has been adopted by another BFF, Donna Battle. Many thanks to the loving, kind and patient employees of Southern Pines. If desired, please donate to the Thomas County Food Bank or Animal Shelter.

A virtual celebration of the life of Thelma Lenora Dekle Blow will be presented in photography and music, gathered and prepared by her children, grandchildren and great grandchildren. Ms Blow was born October 19th, 1928 and passed away January... View Obituary & Service Information

The family of Thelma Dekle Blow created this Life Tributes page to make it easy to share your memories.

A virtual celebration of the life of Thelma Lenora Dekle Blow...

Send flowers to the Blow family.