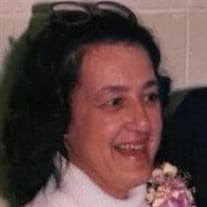 Vivian Lee Lawson (née Rhines) of Ochlocknee, Georgia died peacefully at Archbold Medical Center on Tuesday, February 15, 2022 surrounded by family. Vivian was born and raised in Knoxville, Tennessee. After coming of age, she married her childhood crush, Raymond Rule Lawson, a veteran of World War II and Korea. In fact, she had told him when she was 5 years old that she would marry him when she grew up. He brought with him daughters Barbara, Jean, and Shirley from a previous marriage whom Vivian loved as her own. Raymond was still in the Army when they married and he moved the family to Fort Benning, Georgia where their children Robin, Dewey, and Mary Lynn were born. They moved to Ochlocknee after Raymond’s retirement and opened a successful automotive shop that is still operational today. She was a member of Dawson Street United Methodist Church in Thomasville, but had been unable to attend for a number of years. She was an avid genealogist, and, after discovering the depth of her Native American roots, was actively involved in Native affairs. To the other Cherokee that the Cherokee Nation forgot, she was known as Panther. She was elected principal chief of her tribal organization many times, and she carries that title with her in death. Vivian was preceded in death by her husband Raymond, her sister Linda, her daughter Barbara, and by grandsons Brian, Jacob and Robert Allen. She is survived by her children, her brothers Gary, David, and Ricky, and her grandchildren; Malcolm, Lisa, Vince, Rhonda, Stacy, Shannon, Adam, Drew, Sharon, Kevin, Lindsey, John Michael, Steven, Aaron, and Jessie. She would be the first to tell you she had “too many great-grandchildren to count.” You could say the same about the great-great-grandchildren that survive her. Vivian was known far and wide and loved by all that knew her. Her light shone over every corner of the world, and the world is much less bright with her gone. In lieu of flowers, the family asks that donations be made in her name to the Museum of the Cherokee Indian in Cherokee, North Carolina, where her and Raymond’s picture hangs as Chief Panther and Gray Wolf.

The family of Vivian Lee Lawson created this Life Tributes page to make it easy to share your memories.

Send flowers to the Lawson family.