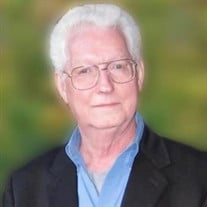 Medical doctor and pastor William Henry Gainey's life drew to a peaceful close on May 7, 2022, after a long battle with advanced Myasthenia Gravis and prostate cancer. Surrounded by his loved ones, Dr. Gainey, age 81, quietly left his earthly body and entered the arms of his Lord and Savior. Dr. Gainey was born on February 6, 1941, in Atlanta, GA, to Opie Hartsfield Gainey and James William Gainey. He earned his bachelor's degree at Georgia State University and then took a year off to play the French horn on an international goodwill tour of the Middle East before enrolling in the Medical College of Georgia. After graduating from medical school in 1969, Dr. Gainey began his residency in Family Practice at Hoag Hospital in Newport Beach, CA, where he met the love of his life, Gale. On their first date, Dr. Gainey took Gale to dinner at Denny's followed by an evening church service at Calvary Chapel Costa Mesa. They married in 1973 and moved their young family to Thomasville in 1979, where they raised two daughters. Known locally as both Dr. Gainey and Pastor Henry, the family often said he spent his life "saving bodies and souls". For more than two decades, Dr. Gainey was a fixture in the Archbold Hospital emergency room, where his gentle demeanor and prayers helped comfort those in crisis. In later years, he continued his medical career at Southwestern State Hospital. With his friends and colleagues, Dr. Dom Monda and Dr. Arch McNeill, Pastor Henry co-founded Calvary Chapel of Thomasville in 1996, where he served as pastor until 2018. His Christian ministry included traveling to Thailand, China, Japan, Haiti, Belize, and India as a medical missionary, authoring the book "The Afterglow" (published by The Word for Today), and writing an original musical based on the Biblical book of Esther. Locals can tune in and enjoy Dr. Gainey's Bible studies, which are still broadcast on 98.1FM WJGG. By those who knew him best, Dr. Gainey will be remembered for his love of corny dad jokes, his passion for See's Candy Nuts & Chews, and his devotion to the Dairy Queen Blizzard. His favorite local meals were the chicken plate at Fallin's Barbeque and spaghetti with meat sauce at Mom & Dad's. While he did not play sports, he loved football and cheered for Matthew Stafford and the Georgia Bulldogs. If you have not accepted Jesus as your Lord and Savior, Dr. Gainey would want you to remember, Christ died for your sins and you must believe in Him to have eternal life. Dr. Gainey is predeceased by his parents. He is survived by his wife of forty-nine years, Gale Grogan Gainey, daughter Amber (Tim) Gainey Meade of Los Angeles, daughter Ginger Leigh Gainey, grandson William Barrett Martin, grandson Ashton Taylor Martin, and Dr. Gainey's four siblings, Valerie (Emile) Gainey Castanet of Florida, Pamela (Ron) Gainey Hilburn of Texas, Jean Gainey Petrof of Canada, and James Louis Gainey of Texas. The family held a small private service for Dr. Gainey, and his marker will be placed in the Gainey Cemetery near his parents and extended relations. In lieu of flowers, please consider donating to the Archbold Memorial Hospital Foundation at www.archboldfoundation.org.

Medical doctor and pastor William Henry Gainey's life drew to a peaceful close on May 7, 2022, after a long battle with advanced Myasthenia Gravis and prostate cancer. Surrounded by his loved ones, Dr. Gainey, age 81, quietly left his earthly... View Obituary & Service Information

The family of William Henry Gainey created this Life Tributes page to make it easy to share your memories.

Send flowers to the Gainey family.