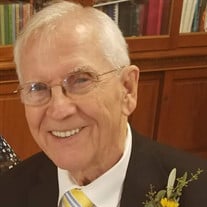 William Albert Klug (Bill) passed away at his home in Thomasville, September 17, 2020. One of ten children, Bill was born to Roland and Erna Klug in Milwaukee, Wisconsin, on September 3, 1933. He moved with his family to Florida where he lived in Dunedin from 1973-2000 and in Beverly Hills from 2000-2014 before relocating to Thomasville. Bill led a life of service. He served in the U.S. Army from 1952 to 1955. He received many letters of commendation from the U.S. Postal Service for performing beyond expectations. He retired from the postal service in 1992 after 32 years of service. In addition to serving as a volunteer fireman, Bill volunteered with Meals on Wheels and as a poll worker for many years. He was granted honorary life status in the Knights of Columbus in 2007. For as long as he was able, Bill never turned down the opportunity to help others. A regular blood and apheresis donor, Bill was recognized by LifeSouth in 2012 for donating over forty gallons which benefited over a thousand people. He will be remembered for his kindness, his willingness to work hard without complaining, and his ardent support of the Green Bay Packers. He was an avid Geocacher, and found geocaches in all 50 states as well as several foreign countries. Bill was blessed to spend sixty-three years with the love of his life, Barbara Alice Sakowski Klug. Bill is preceded in death by his parents, a son, William Mark Klug (Billy), and his siblings, Norbert Klug (Jean), Ginger Klug (Shirley), Millie Klug, Harvey Klug (Carol), Marcie Schreck (Bob), Carl Klug (Deloris), Bobby Klug (Patricia), Elaine Junker, and Eddie Klug (Eleene). A daughter-in-law, Barb Klug, and a step-grandson, David DeBlare, also preceded him in death. He is survived by his devoted wife, Barbara, and children David Klug (Sara) of Clearwater, Florida, Laura Kornegay (Dusty) of Thomasville, Georgia, and Dawn Klug of Asheville, North Carolina. He will always be remembered as “Grampy” to his grandchildren, Lizzie Smith (Joel), Emily Baig (Altamash), and C’lee Kornegay and his step-grandchildren Jennifer DeBlare, Mary DeBlare Moreno, Travis Cook, and Julie Cook. He will also be remembered by many nieces and nephews. He will be missed by his sweet dog, Taco Belle who gave him comfort, love, and many licks in his declining years. The family would like to thank caregiver Kathy Gulyas for helping to make his final days as comfortable as possible. The family is also grateful to Hospice of Southwest Georgia. A funeral mass will be held at St. Augustine Catholic Church where he was a member on Saturday, September 19, at 11:00 am. In lieu of flowers, the family requests that memorial donations be made to the Knights of Columbus, the Alzheimer’s Association , Hospice of Southwest Georgia 114 Mimsoa Dr. Thomasville, Ga, or a charity of the donor’s choice. The family invites friends to lunch at the clubhouse at Huntington Pointe following the service. Friends and family are invited to visit his online tribute page at www.allenfh.com.

William Albert Klug (Bill) passed away at his home in Thomasville, September 17, 2020. One of ten children, Bill was born to Roland and Erna Klug in Milwaukee, Wisconsin, on September 3, 1933. He moved with his family to Florida where he lived... View Obituary & Service Information

The family of William Albert Klug created this Life Tributes page to make it easy to share your memories.

William Albert Klug (Bill) passed away at his home in Thomasville,...

Send flowers to the Klug family.